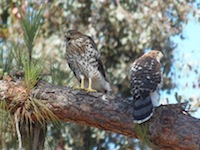 July 1, 2013 (Jamul) – Debbie Ekhaml captured these close-up images of a Cooper's Hawk family in Jamul, as the fledgling hawks learn how to successfully hunt a sparrow.  Cooper’s Hawks prey on birds and small mammals, even taking on prey larger than themselves such as ducks and chickens.  They have sometimes been known to lose their lives for taking on the wrong prey, such as a large owl. 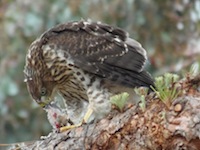 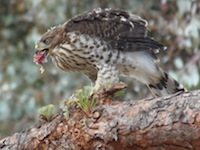 The Examiner had an article in 2010 on Cooper’s Hawks moving into urban areas as well as rural ones in San Diego County, much as Peregrine Falcons have done.  The story shows the risks involved in hunting, a learning experience: “The Cooper's hawks' main method of hunting is flying from one tree or bush straight into another, catching prey off-guard, especially nesting birds. Studies have shown that a large portion of deceased Cooper's hawks have had healed-over broken bones from this method of hunting. Another style is dropping down on prey from a high perch or from the sky, especially effective against mammals and ground-dwelling birds. They will also swoop down and scare birds on the ground into the air and catch them as they take off or after a short chase. Also observed is “mimicking” a species of bird by flapping its wings in the same manner as the birds they're hunting, masking their presence in the flock for a short time.”