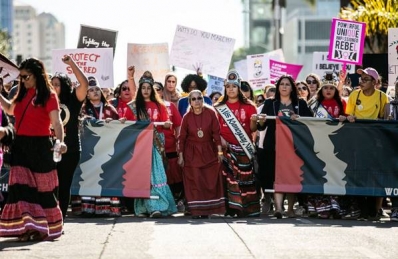 January 22, 2019 (San Diego) — Kumeyaay women were among the groups participating in the 2019 San Diego Women’s March and program at Waterfront Park.

Virginia Christman, Kumeyaay elder and cultural educator from Viejas, offered a traditional blessing and bird song at the start of the program. Christman has also served over a decade on the Viejas Tribal Council, including a term as Vice Chairperson. 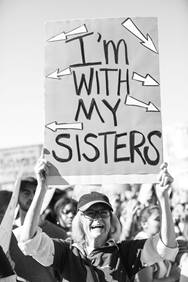 The line-up of speakers also included Melissa Hill, whose lineage includes the Viejas band of the Kumeyaay nation, Navajo Nation and the Tonawanda Band of Seneca Indians. Her passion for her culture, social justice and humanitarianism have led her to join the front lines as a water protector at Standing Rock and to speak out at women’s rights events, climate change marches and indigenous panels.

According to organizers of the women’s march, the focus is on meaningful inclusion of diverse women and a program that represents issues most pressing to the San Diego community and that align with the Women’s March San Diego unity principles.  The women participating came from a wide variety of ethnic, racial, religious and socioeconomic backgrounds.

Assemblywoman Shirley Nash Weber, Ph.D., whose district includes portions of East County, was also a speaker at the event. 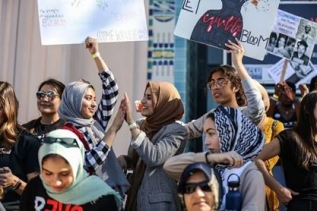