February 15, 2014 (Jacumba)—Wayne Brammer sent in these photos of SDG&E’s new Eco Substation in Jacumba. The project is (so-named for hooking up to industrial-scale renewable energy projects. But to most backcountry residents, the project is an ecological disaster that destroyed the landscape and used three times more water (90 million gallons total) than SDG&E estimated.

“This thing is a monster and they’re wasting water all over the place, not just here but all the way to Boulevard,” writes Bramley, referencing other energy projects in the pipeline.  “We really do need to separate from the city and have our own county,” he concluded, linking back to a reader’s editorial on this issue. 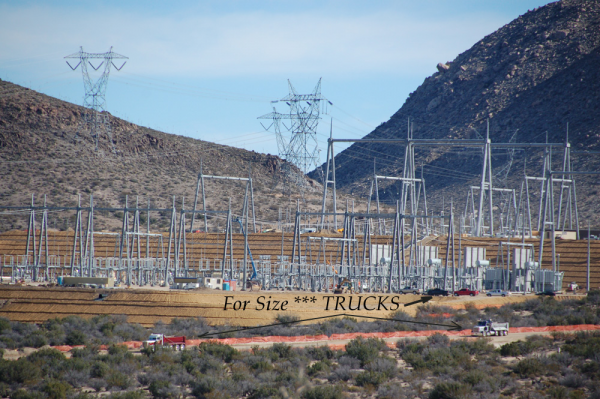 You can see the horrific visual plight the back country is facing when you view the large, denuded dirt land scar from this project that sticks out like a sore thumb and looks like one - both up close and from many miles away. We could easily pick it out from Tierra Del Sol Rd. where we stopped for lunch to enjoy the vista today. All the metal makes it look that much worse.
Another hideous disfigurement of the land. And isn't it ironic--perhaps it isn't!--that the responsible party, government, is the same one entrusted with it's protection? Towering Wind turbines, endless acres of solar panels, numerous substations, and miles of power lines: open, undeveloped land that was largely as it had been when the first pioneers crossed these rugged mountains and deserts is now being industrialized for utterly specious, entirely political reasons. Parts of it are beginning look like L.A. county. It must stop.
California is in the midst of its worst drought in more than 100 years. After arriving in California Friday afternoon, Obama was to meet with area farmers and announce more than $160 million in federal financial aid, including $100 million in the farm bill he signed into law last week for programs that cover the loss of livestock. -- Financial aid to farmers -- I wonder if that will include money for hay (alfalfa) growers who are harvesting hay four times a year, bailing it, compressing the bales and then shipping it off to Asian countries? It's the new industry in California and other western states. -- It's cheaper to ship containers of compressed hay to Asia then it is to ship it from the Imperial Valley to San Pedro harbor! -- Why use scarce water for food for Americans when it's more profitable to ship hay to Asia!
Don, you make some good points! Hopefully Obama will also cover the water loss to the 2700 Organic farmers in the state, many of whom depend on groundwater and wells to grow their crops? Water costs up to $2,000 an acre foot in California for farmers if they buy it on the open market. It is ironic that Obama is subsidizing massive 'dirty-green' energy projects [coincidently for foreign companies] during a time of serious drought. They will only exacerbate the problem as they strip the earth of valuable cover that helps to trap moisture and could potentially decimate our wells and wetlands. Where is the EPA??! Also, we famously hear how these companies 'bring jobs' to the area. I live in Jacumba and know of NO locals who have been employed. There are some [union of course] from Barstow and San Diego but a lot as well from Arizona. This is because all the sub contractors hire on their own and its the same out of town crews. There will be a net job loss when the construction is over due to farms and ranches folding and people moving away. What a shame!
The 90 million gallons of water is 277 acre-feet of water, which is of course a lot of water. Pouring all that water on sand to stabilize it for construction begs the question that perhaps, just perhaps, the site selection was a bit flawed. It is an ecological mistake. But let's put it into perspective. The average household in California uses a range of from 1/2 to one acre-foot of water annually. That's about 300,000 gallons of water, or nearly a thousand gallons per day, or about 200 gallons per person per day. These are rough figures. That means that the amount of water dumped on the sand at the sub-station site was about the same amount of water used in tiny Jacumba, with its 216 households, in one year. Over a quarter of this water, they say, goes to flush toilets. People who have been to Australia and New Zealand, and perhaps other places, have no doubt noticed the buttons on toilets allowing a half flush when a full flush isn't required. Think how much water that device would save in California (and elsewhere)! We're talking about saving 15-20% of domestic water! Many hundreds of millions of gallons! That's just one example. So yes, let's be concerned about water dumped on the sand, but let's also think about how irresponsible our domestic water usage is.