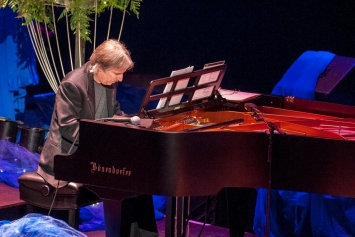 December 28, 2017 (Descanso) – Acclaimed pianist, guitarist, vocalist and songwriter John Nilsen from the Pacific Northwest will perform a solo piano concert on Saturday, January 13th at 2 p.m. at Chapel of the Hills Community Church, 25153 Viejas Blvd. in Descanso. The concert is free of charge. The church will provide light refreshments, a chance to chat with the artist in a reception after the performance, and his musical CDs will be available for purchase.

According to his bio, Nilsen is one of the Pacific Northwest’s most successful performance and recording artists, with records that have sold well over a million copiesl His love of the outdoors is reflected in many of his works. Chosen a Deering Banjo artist in 2016, he has performed in all 50 states and many foreign countries, also speaking and conducting residencies on songwriting and music performance at schools across the U.S.  He has performed with luminaries such as Jose Feliciano, Jesse Colin Young and Marc Cohn and Kenny G. 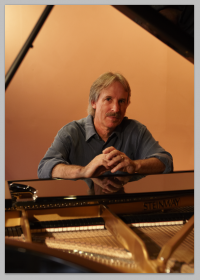 royalties. He has performed solo and with his two musical groups, the Joh Nilsen Trio (folk, classic, jazz and rock) and John Nilsen and SWIMFISH, a folk-rock band.

Three of his CDs charted nationally:  Where Rivers Run, As Far AS Near, and Across Oregon, which reached #8 nationally. His newest release, Local Ocean, features SWIMFISH, released in Jauary 2017.  The late Dan Peek, founding member of the rock band America, wrote of SWIMFISH, ”The music is superb, the lyrics inspired and the production/arranging is top notch. The songwriting hangs together well and the tracks flow, carving out a groove as naturally as a river carves a canyon.”

This will be Nilsen's third year of performing in Descanso, which is located just east of Alpine off Interestate 8.

For more info on John Nilsen and his work, see www.johnnilsen.com and/or www.magicwing.com. The church's website is www.chapelofthehills.org. 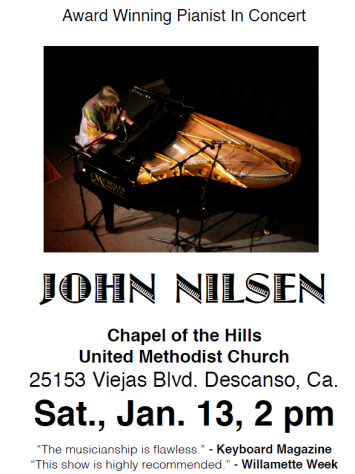