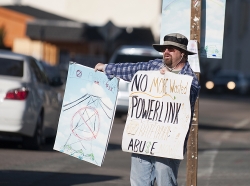 The Powerlink construction, which will take about two years to construct and is scheduled for completion in 2012, has drawn criticism at every step of the process, including hundreds of Alpine residents who have turned out at past hearings to voice overwhelming opposition to the project.

"We're trying to get this rip-off powerline to stop." said Lutz, who called for investment in solar energy instead. "This is something that never should have been approved to begin with. It is a complete waste of ratepayer money … Even if you love the sight of transmission line towers, if you are someone who doesn't like to waste money you will be against this."

Orange-clad construction workers and G&F Concrete Cutting trucks filled the middle of Alpine Blvd. A handful of residents stood on the sidewalk watching the event. The California Highway Patrol and local San Diego County Sheriff deputies were present but the protest remained civil and peaceful. 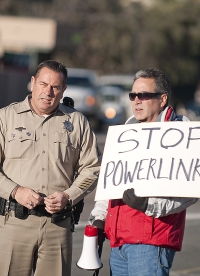 Lutz continued, "The fact is that we need to be moving over to solar energy. If they took the same money, they could easily put in enough solar, and maybe twice as much power as they are going to get on the line … $1.8 billion (the cost of the Powerlink construction) could put in twice as much power as this line could carry. This line does not generate any power. The bottom line is it's a ripoff."

According to SDG&E, Powerlink could ultimately transmit up to 1,000 MW, however the power would be generated outside San Diego County--and much of it would be transported to Los Angeles, not used locally.

Meanwhile, SDG&E and Sempra Energy continue moving forward with their controversial Powerlink construction even though there are still legal challenges being made.

"We are trying to shed some light on this," Lutz said. "A lot of people in the county don't realize that even though these lawsuits are pending they've already started work on it. They are digging up the middle of the road here in Alpine," he said of the 1000 MW line being undergrounded, "that people will be walking over."

The safety of electromagnetic radiation (EMR) is still unknown. The subject remains contentious and is still being researched. Some studies suggest that living near EMR can double the risk of leukemia and/or brain tumors in children.

"It goes right by the school, children will be near it," continued Lutz. "This is something that radiates. Who knows what the dangers are. They don't really know. They are just now saying that cell phones are dangerous to use and they aren't going to put out nearly the radiation as this thing." 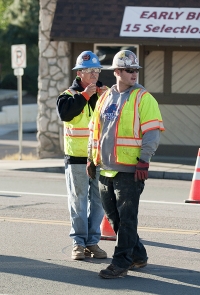 Several citizens’ groups opposed to Powerlink are joining together to plan a large protest and rally Monday, March 7 at 12:30 p.m., in front of the Sempra Energy building in downtown San Diego. A march is planned from Sempra to the Federal Courthouse, where a federal lawsuit filed by three local groups (Save Our Communities Foundation, Backcountry Against Dumps, and the East County Community Action Coalition/ECCAC) will be heard in court.

Laura Cyphert, co-founder of the ECCAC, has also urged residents opposed to Powerlink to contact new Governor Jerry Brown and ask that he request a new review by the California Public Utilities Commission (CPUC).  The Governor's office phone number is 916-445-2841; fax 916-558-3160.

For SDG&E's perspective on the Powerlink project, visit www.sunrisepowerlink.com.