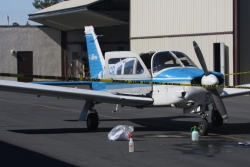 Update January 31, 2012 - The Medical Examiner has identified the victim as Gordon Woodard, 41, of Santee.

January 30, 2012 (El Cajon) – A pilot attempting to start up a stalled plane at Gillespie Field Airport has died after being struck by the propeller and suffering a severe head injury. The pilot has not been identified by authorities yet pending notification of relatives. However the single-engine 1974 Piper was registered to a Lakeside resident.

At 8:30 a.m., the pilot41, and his passenger, “began to taxi out of a hangar located at the west end of Gillespie Field Airport, just south of the air traffic control tower in El Cajon,” said Monica Zech, public information officer for El Cajon. “Reportedly the single-engine plane stalled and the pilot attempted to “hot prop” the propeller,” she added.

Heartland Fire & Rescue from El Cajon transported the pilot to Sharp Memorial Hospital, where he was officially declared deceased.