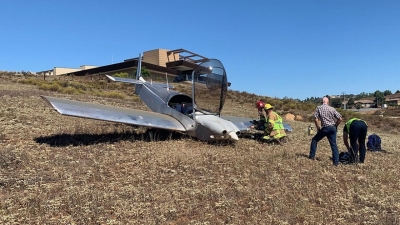 By Miriam Raftery
August 15, 2019 (Jamul) – A single-engine plane went down on a hillside east of the Jamul Casino late this morning, near State Route 94.
Cal Fire Crews responded to the scene. The pilot was evaluated at the scene and was released without injury.  There were no other occupants in the plane and no other damage.
Cause of the emergency hard landing has not yet been determined.