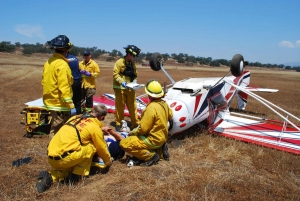 July 24, 2009 (Valley Center) At 11:18 this morning, CAL FIRE-Valley Center Fire Department responded to a plane crash on Guejito Road (on the Guejito Ranch) in Valley Center, six miles north of the Ramona Airport. Copter 10 (Sheriff/CAL FIRE Helicopter) was in the area when the incident occurred as was able to quickly arrive on scene and begin treatment on the pilot. (photo by CAL FIRE battalion chief Nick Schuler)

“According to the pilot his engine went; he then attempted to land when the plane flipped over and landed upside down,” Schuler informed East County Magazine.

The pilot had moderate injuries, and was transported to Scripps La Jolla by Copter 10 with a paramedic on board. The plane was an experimental craft, according to early incident reports to dispatchers.