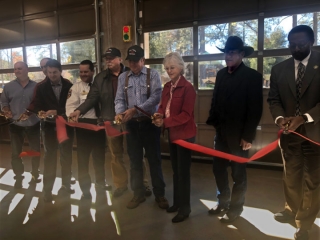 The ribbon-cutting ceremony took place in Pine Valley and celebrated the opening of a two-story, 13,090-square-foot fire station that is almost double the size of the previous building. The structure is designed for full-time firefighters and replaces a facility that was built in 1974.

The new fire station has three and a half double bays for fire trucks, sleeping quarters for 15 firefighters, a kitchen, dayroom, fitness room and lobby/reception area. Solar panels top the roof and the structure was built to Leadership in Energy and Environmental Design (LEED) Silver certification standards to conserve water and electricity.

“This new fire station will better protect the residents of Pine Valley and also support the surrounding communities of Descanso, Mt. Laguna and Boulevard,” said County Supervisor Dianne Jacob. “The County has spent more than a half-billion dollars on firefighting improvements over the past 15 years, and this station is the latest big-ticket investment in protecting the backcountry.”

San Diego County Fire and CAL FIRE Unit Chief Tony Mecham said Fire Station 44 is more efficient and expandable, so it can keep pace with the community as it grows. Changes to the fire engine entrance and road are expected to reduce response times.

“The San Diego County Fire Authority has completed more than 15 fire station construction projects in the past four years,” said Mecham. “The construction and modernization of Pine Valley Fire Station 44 is the latest in our efforts to provide year-round, around-the-clock service to 1.5 million acres in the unincorporated county.”

Officials broke ground for Pine Valley Fire Station 44 last December. The $8.2 million structure is expected to serve the area for the next 50 years.