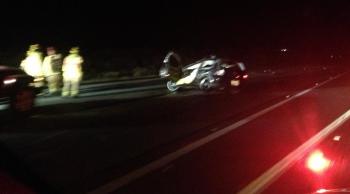 July 18, 2013 (Pine Valley) – A 38-year-old Pine Valley resident died at the scene of a rollover accident that occurred July 17 at 10:18 p.m.   The driver, whose name has not yet been released by the Medical Examiner, was driving a 2001 Volkswagen GTI westbound on I-8 east of East Willows Road in Alpine at a high rate of speed, a witness told the California Highway Patrol.

"It was avery sad night indeed. It was a very dangerous scene to roll upon in the darkness."

said Don Lumb, who sent the photo in this story. "He was still alive, but took almost 30 minutes before the first emergency vehicle even arrived. He passed away while at the scene just prior to advanced help."

Lumb added, "I'm a retired cop and seen these types of incidents too many times over the past 24 years. Speed was an absolute factor in this case..."

According to the CHP, the driver lost control and the vehicle careened across the median and down an embankment, overturning.  The vehicle came to rest in the eastbound lanes on I-8.

The driver sustained severe head trauma as a result of the collision.  Alpine American Medical Response arrived on scene and pronounced the driver deceased at the scene.

It is unknown whether alcohol and/or drugs contributed to this collision.  The collision remains under investigation by the El Cajon CHP.