August 5, 2015 (Pine Valley ) –At a town hall meeting convened by disgruntled shareholders in the Pine Valley Mutual Water Company on August 2nd, over 100 people turned out to discuss a controversial water sale to Rough Acres Water.  A petition asking the water company to terminate the Rough Acres contract was passed out at the meeting and many attendees picked up copies of the petition.

But at an official water company meeting on Tuesday, two nights later, shareholders who didn't RSVP were turned away by armed law enforcement officers, much to the dismay of residents/shareholders seeking to voice their concerns to their elected board. 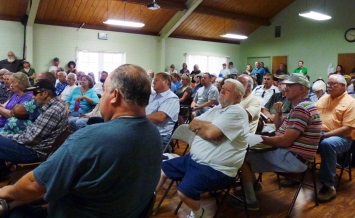 At Sunday's town hall, many voiced dissatisfaction with the board’s response to shareholders’ concerns, including a “survey” sent by the board to shareholders that asked shareholders’ opinion on banning all water sales outside the service area—and having water rates hiked up dramatically.  Ratepayers, at a meeting June 27th, had pointedly asked the board to undo only the 5 million gallon water sale proposed to Rough Acres Water in Boulevard slated for use on a solar project opposed by Boulevard’s Planning Group.

Bob Turner laid out the issues.   Hauling 5 million gallons to Boulevard wound entail some 650 to 2,000 round trips depending on the size of the truck.  Rough Acres Water is a front for a developer, Hamann’s construction business, which wants to build an industrial solar project but can’t buy water itself, so it formed a water company.  The project is on hold for now, since Soitec exited the solar business.  Despite that, Turner stated, “I want Rough Acres’ contract terminated. The next contract, we should be involved in, don’t you think?”  The audience applauded.

Barbara Marr, a long-time Pine Valley resident,  noted that concerns about water supply in Pine Valley date back generations.  She pointed out that Pine Valley’s planning group rejected a solar project in Pine Valley that most residents opposed, adding “We sure don’t want it in Boulevard!”

Jeane Seaman, who has lived here for 40 years agreed, citing concerns for Boulevard residents who  have mostly opposed the solar project there.  “I want to be a good neighbor,” she said. “I don’t want anybody pushing people around out there who are our friends and neighbors.”

Bob Zaidman noted, “There’s never been a problem here selling to the Forestry  or the Fire Department, or to our neighbors.”

The water board, in an e-mail sent July 31st to East County Magazine, defends its action to ask for termination of all outside water sales –or none.   The letter states the the board “does not believe it is prudent policy for the Company to engage in any outside water sales, if the considered and informed business judgment of the board of directors about a particular outside awter sale will be subjected to after the fact attack and repudiation, possibly exposing the Company to claims for money damages for breach of contracts validly entered into by the company.”

However the contract clearly states that it can be terminated with 90 days written notice, making it unclear why the board is concerned about potential litigation. Or for that matter, why it is apparently not concerned about litigation from shareholders for having their wishes ignored.

The board letter also states that the survey is “not a legally binding action” and moreover that “there is no legal requirement for outside observers” of the count.  As for the shareholders at the June 27 meeting, the board letter states that bylaws allow election of officers with just 20% present or voting by proxy, but 30% for other matters to be binding actions by shareholders.  The board refused to provide a copy of its bylaws by email, stating these must be picked up in person. A request for hours and copying costs has not received a response.  The board also defended its election procedures in what it called an “undisputed election” of board members June 27, though a tape of the meeting clearly showed considerable dispute discussed at length in a contentious session.

Many voiced anger at the board.

“We’re being treated like fools,” one shareholder stated at the town hall meeting.

At least two speakers called for the water company to cancel the Rough Acres contract and not raise rates, noting that the company has been profitable.JoAnn Betscher said she reviewed audits of the water company and found other budget items that she believes could be cut, if expenses need to be pared."There is enough that coudl be reduced in this budget to not cause any increase in water rates," she maintained.

Turner stated, “I’d rather pay  more and have water than not pay and not have water.”

Some defended the board’s actions, at least in party.

Story Vogel stated he believes people are “attacking the board unfairly” since the county asked the water board to sell water to Rough Acres because “they don’t want to draw down the water table in Boulevard” and since only one of Pine Valley’s wells would be utilized, one that is currently not being used to supply water locally.

Another shareholder noted that Pine Valley uses flowing water that if not drawn out, would flow downstream.  A third said that he has “no problem selling surplus water at a premium if it keeps our rate down” but wants some questions answered to assure safeguards are followed.

Vern Sonksen said people shouldn't blame the water board if they don't show up to meetings.  "Get active in your community," he told the audience.

But the vast majority here clearly want the Rough Acres sale stopped and also made it clear that they are fed up with the water company board’s actions.

Another shareholder accused the board of trying to sabotage the town hall by taking down signs and putting them back up facing the wall, blank side out.  “The water company has been observed doing that,” he said.

Shareholder Craig Black stated, “It’s irresponsible to sell water in a drought, and insulting…We need a turnover in leadership at the water board, because this is crazy.”

Ron Simpson stated, "Pine Valley Creek used to flow through my backyard...I was down there just today; the creek is bone dry...It's our water. It's your water, and when it's gone, it's gone."

After Sunday’s town hall,  some shareholders attempted to attend the Tuesday night meeting of the Pine Valley Mutual Water Company – only to be turned away at the door by armed Sherif’s guards, multiple sources have told ECM.  State law allows mutual water companies to require a 24-hour advance notice from those who wish to attend a meeting, though there is no requirement to do so.

The board, which meets in  a community center with abundant seating, has offered no explanation for its heavy-handed tactics to shut out dissident shareholders, leading to rumors of potentially stronger actions in the future to protect shareholders’ rights and assure a democratic process.  Potential steps could include legal action and/or a recall election to oust board members—though the latter could be problematic, depending on who counts and observes the votes.

I am sorry to say you have once again misstated the facts. You state in the article above : "State law allows mutual water companies to require a 24-hour advance notice from those who wish to attend a meeting, though there is no requirement to do so" That is absolutely factually inaccurate. You leave the impression that the Water Board has chosen to use the Sheriffs Dept to silence people. Absolute baloney. The fact is : In AB 240, which went into effect I think in January 2014, the State Legislature REQUIRES..repeat REQUIRES that any shareholder wishing to attend a monthly ordinary meeting MUST submit in writing a request to do so. IT IS NOT OPTIONAL ON THE PART OF THE BOARD, You need to issue a correction in order to set the record straight. The Board had no choice. It IS THE LAW. You have unfairly left the impression that the Board did something underhanded. They did not. I suggest you read AB 240 easily obtainable on the internet. This law grew out of a dispute in the City of Maywood and a bill was carried in the legislature that now applies to all Mutual Water Companies As for legal action.and let me restate that I also dont want to sell water to a developer in Boulevard, those saying that have no clue what they are talking about. A Board is elected precisely to make the decisions they have made. If shareholders wake up and are misinformed about what is occurring they are going to say some crazy things. That is one. California Corporations law is pretty clear on what constitutes Board misbehavior and what constitutes fiduciary duty, Obviously those who have said the things you claim have no clue about either.
AB-240 Mutual water companies.(2013-2014)

14305. . .Any eligible person, upon 24 hours advance written notice, may attend meetings of the board of directors of a mutual water company, except when the board adjourns to, or meets solely in, executive session ...

But the board is supposed to represent the shareholders who elected them.