Next on tap:  A Pirates of the Caribbean Party for Haitian earthquake relief 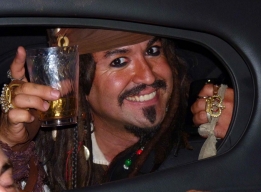 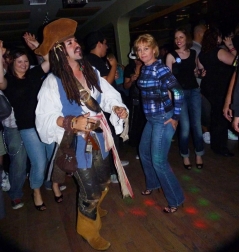 ast County) – Yo, ho, it was a pirate’s night on the town last night as “Sam the Pirate” Mejia led a group of revelers on a pub crawl through East County in celebration of his birthday.

Best known for his uncanny resemblance to Johnny Depp and the Captain Jack Sparrow character popularized by Depp in the Pirates of the Caribbean movie, Mejia started the evening off at his favorite place for grog and grubb: Hooley’s Irish Pub & Grill in Rancho San Diego. 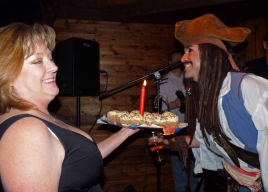 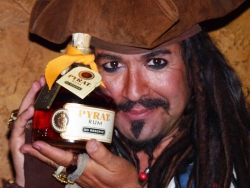 Friends feted their favorite pirate with gifts that include bottles of Pyrate Rum, photographs of comely wenches, swashbuckling accessories, liqueur-filled chocolates and even a colorful painting created by Mejia's favorite tattoo artist.

A limousine ferried party-goers to “Hooley Two”, as the new Grossmont Center Hooley’s has been dubbed by Mejia. Celebrants included Rancho San Diego-Jamul 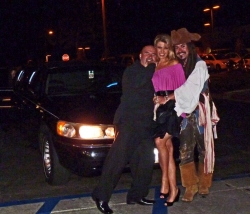 Chamber of Commerce President Valerie Harrison, who served up 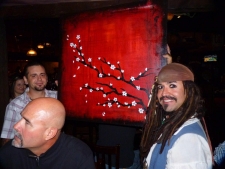 Several other East County residents, business people, and other friends of Mejia also participated in the festivities.

Editor Miriam Raftery joined the swashbuckling crew on a rollicking night of revelry that culminated at the El Cajon Grand,where the No Doubt tribute band “No Duh” performed--complete with a Gwen Stefani look-alike singer. 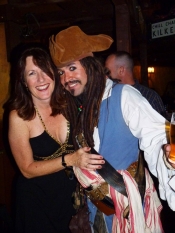 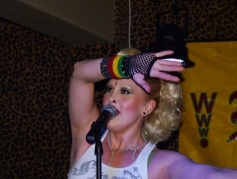 Sam the Pirate invaded the dance floor, sweeping wenches into his tattooed arms, hoisting toasts to boisterous would-be buccaneers, and charming all on board.

Mejia was sly, however, when asked to reveal just what birthday he was celebrating. The crafty pirate, who calls himself an "old soul" replied with a wink, "Three hundred."

The evening wound up where it all began--with the pirate and crew of merrymakers hoisting pints of ale and rum at Hooley's--a perfect den for a band of buccanneers. 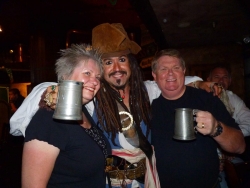 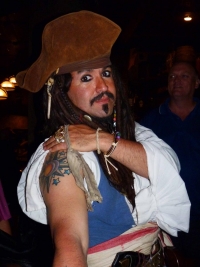 If you missed the fun, take heart! East County’s most popular pirate captain has volunteered to be the grand prize at East County Magazine's June 6th Bridal and Beauty Fair, where some lucky bride-to-be will win a bachelorette party hosted by the charming rogue.

For information on the Bridal and Beauty Fair, which is co-hosted by La Dolce Belladonna Salon & Spa, see http://www.eastcountymagazine.org/node/3366. 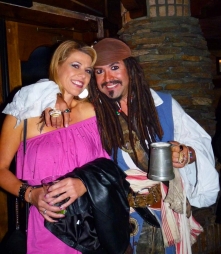 At last night’s event, Mejia also generously agreed to donate his services for an East County Magazine event in partnership with a local relief group.

Watch for details soon on our “Pirates of the Caribbean” party with Sam and East County Magazine’s fun-loving crew—all to benefit orphan survivors of the earthquake in Haiti.  Corporate and individual sponsors, prize donors, and party-goers wanted.   (Contact editor@eastcountymagazine.org for details.) 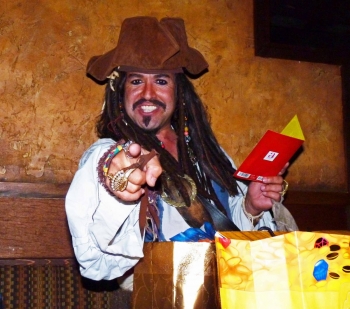 Ahoy, readers, we hope to see you all there!