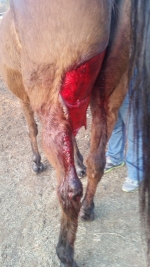 “He’s 26 and I thought for sure I was watching him get killed,” she said of her horse. “Thank God he got away, but the dog chased him for a mile.”  Russell was also wounded, sustaining head trauma, whiplash and other injuries including a sore back and leg, as well as bite mark on her arm that didn’t break the skin.  She required  treatment at the Emergency Room for her injuries.

The dog stopped its attack only after Russell’s friend on horseback intervened, trampling the dog to stun it until a man she believes is the owner came and took the dog away, claiming it belonged to a visitor from Pennsylvania.

In the 2011 attack, the resident had claimed the dog belonged to a visitor from Los Angeles. According to a listing on Zillow, a real estate site, the home has been under the same ownership since 2010

In the earlier attack on February 28, 2011, Marilyn Gramse wrote in an editorial published on ECM that two equestrians were riding on a designated trail on Quail Canyon. When the approached the home at 10937 Quail Canyon, a pit bull dog and the resident came out to the equestrians, Gramse said.

“The pit bull began sniffing the horses, bit the rider, and attacked the horse—going for the throat. The horse, struggling for its life, began to circle, dumping the rider,” she stated. “The rider hit her head on the drop-down mailbox and fell to the ground. The horse began running down the center of Quail Canyon with the dog hot on her heels.” A passerby stopped to offer aide. The horse was taken to an emergency animal clinic, where it had stitches and a drain installed.

Gramse complained at the time that three calls to County Animal Control were not returned, until she next called supervisor Dianne Jacob.  Within an hour, Animal Control arrived but indicated the owner would only receive a ticket to appear in court and a fine of $150 to $300.

“Everyone in Blossom Valley will be at risk walking, riding, bicycling, or running passing the home at 10937 Quail Canyon as this yard is not fenced,” she wrote at that time.

Russell is angered to learn that a prior dog attack on a horse occurred at the same address where her horse was attacked yesterday.  Like the prior victim, she says she called Animal Control and the Sheriff. She is seeking to find out whether the pit bull that attacked her is the same pit bull involved in the savage 2011 attack.  She says she intends to pursue legal action, because “I don’t want it happening to anyone else.”

ECM also contacted Animal Control and the Sheriff. The Sheriff referred us to Animal Control.  Daniel DeSousa, deputy director of the County's Department of Animal Services, responded and said the Department is investigating the most recent attack. "Our Department is investigating this most recent attack.  As our animal control officer did not witness the attack, we cannot pursue criminal charges against the dog owner.  That being said, the witnesses to this incident have been offered the opportunity to pursue a Private Person’s Arrest against the dog owner for the multiple violation and we will be filing criminal charges at their request," he said.

California penal code allows trained Animal Control officers to arrest a person only if it is a felony, or if they witness a public offense.  A dog attack on a horse and person is not a felony, DeSousa says.  However the code also gives citizens a right to make an arrest and Russell is following through on her legal rights and has filed a complaint.

In addition, De Sousa advised ECM, "The Department is also looking into declaring the dog to be a public nuisance under our County Code.  If the dog is declared to be a public nuisance, the Department has the authority to abate that nuisance either by the imposition of conditions and restrictions upon the dog owner for the continued maintenance of the dog or through the destruction of the dog.  That decision would be made by the Department’s Dangerous Dog Task Force once our investigation is complete."

But first, they have to find the dog.  Russell told 10 News that a vehicle stopped and picked up the dog shortly after the attack, then drove off before Animal Control arrived.

Supervisor Jacob responded to our inquiry, voicing concern over the attack.  “I’m deeply troubled by the injury to the horse and the rider," she told ECM. "I’m anxious to learn the results of the investigation by the Department of Animal Services, and to see what actions can be taken.  Although the state precludes local jurisdictions from enacting laws that are specific to a particular breed, the County does have a model dangerous dog ordinance that is fully enforced.”

Russell believes the dog is dangerous. "He needs to be put down. I have pit bulls. I think it's the owners that cause the problems with any kind of dog," she adds. Russell. ""I think the owner needs to be in jail or something severe needs to happen to him for allowing this dog to be like this and to let it run free.

The injured horse was rescued by Russell 15 years ago from inhumane conditions.  She later established Rapture's Horse Rescue Foundation in El Cajon, with the name inspired by the horse who has again suffered cruel injuries.

View a 10 News interview with Russell and another witness to the attack: http://www.10news.com/news/horse-rider-survive-vicious-pit-bull-attack-1...

Craig has the right idea. This dog needs to " assume room temperature", The moron who owns him needs to be sued into bankruptcy. Through my numerous dealings with SD County Animal Control, they are great at taking your money and issuing pot metal dog tags. They are pretty useless otherwise.
Please do a follow up and let us know if this is the same dog and if anything is going to be done before someone is killed. Ironic that this person claims it is always an "out of town" dog. There is a leash law in the county. No one is allowed to let their dogs run at large, whether the owner is right there or not. There seems to be a lot of people that think because they do not live in the city it is ok. IT IS NOT! A horseback rider is extremely vulnerable and it is a miracle no one has been killed. Carry pepper spray, taser, whatever you need to defend yourself. If you see this dog, try and dismount as quickly as possible. If this animal ever laid a tooth in me or my horse, he would not be breathing today. This owner is as big a menace as his dog-something needs to be done!
The dogs should be banned in San Diego County.
(What rifles were made for.)