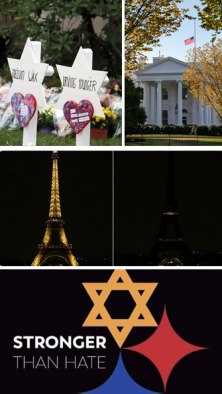 November 1, 2018 (San Diego) – Around the world and locally, the world grieves the slaughter of 11 Jewish people during a worship service and baby-naming ceremony at the Tree of Life Synagogue in Pittsburgh, Pennsylvania this week.

In San Diego, people of all faiths came together to show solidarity in the face of the attack by an avowed anti-Semitic mass shooter.  Congresswoman Susan Davis (D-San Diego), who is Jewish,  posted on social media, “An overflowing and diverse crowd of thousands brought love and resolve to Temple Beth Israel - demonstrating how strongly San Diegans reject hate and division. So proud of everyone who stood up and said: Not Here! Not Anywhere!”

Congressman Duncan D. Hunter (R-Alpine) has been silent on the issue on his social media.

His opponent, Ammar Campa-Najjar, issued this statement: “I am horrified by the heinous attack,” adding, “There are no words to fully convey our sadness and horror at the murder of Jewish people who were worshipping with their community on Shabbat."

Campa-Najjarcontinued, "In the coming days, we just do everything we can to provide support to the Jewish community and stand together with all communities across the country in responding to this tragedy. We as a country must all join together in condemning the rising tide of white nationalism, racism and hatred directed at Jewish people and other minorities. We must call for an end to the rhetoric that has emboldened bigotry and racism, that is dominating our national discourse and breeding violence.”

Landmarks around the world, from the Eifel Tower in Paris to the Empire State Building in New York, turned lights off briefly in commemoration. The Pittsburgh Steelers posted an altered logo with Jewish star of David added and the message, “stronger than hate.”

At the White House, flags are being flown at half mast.  Attorney General Jeff Sessions issued a statement after indictment of the shooting suspect on 44 federal charges, 32 punishable with the death penalty.

"Every American has the right to attend their house of worship in safety," Sessions said. "These alleged crimes are incomprehensibly evil and utterly repugnant to the values of this nation. Therefore this case is not only important to the victims and their loved ones, but to the city of Pittsburgh and the entire nation."

President Donald Trump has called for the death penalty in the case and denounced anti-Semitism.  In a visit to Pittsburgh, however, the President was met with thousands of protesters and has drawn sharp criticism nationwide for proclaiming himself a “nationalist” last week, for refusing to denounce Nazis marching last year in Charlottesville even after a protester was rammed by a white nationalist’s vehicle and killed, and for ratcheting up rhetoric at his rallies inciting hate groups that target not only racial minorities and immigrants, but also Jews.

The shooting suspect, Robert Bowers, 46,  a truck driver, made anti-Semitic comments to law enforcement, called for the death of Jews and on social media, blamed Jews for aiding a migrant caravan in Mexico, parroting a talking point fomented on right-wing sites without substantiation.  According to his posts, Bowers believed that those in the migrant caravans were violent, a point the President himself has raised, claiming without substantiation that some migrants may be terrorists despite evidence that the vast majority are victims of violence fleeing Central America in search of a safe haven for their families.  Bowers repeatedly called them "invaders" on posts on the site Gab, a pejorative term the President has used to refer to migrants.

In Pittsburgh, Muslim groups have raised over $180,000 to help the synagogue shooting victims. "We're just repaying the favor," says Wasi Mohamed of the Islamic Center for Pittsburgh, who noted that Muslims have felt similar support from the Jewish community when they faced persecution in the past, CNN reports.

Bowers pled not guilty this week.  Among the crimes he is charged with are obstruction of free exercise of religious beliefs resulting in death, use of a firearm to commit murder, and 10 other death penalty charges.

Judah Samet was caught in the crossfire but for the second time in his life, survived violent anti-Semitism.  Samet, 80, previously survived imprisonment in a concentration camp. When his family in Hungary was rounded up, he recalls what bothered him most: ““Nobody paid attention. Nobody cared. They were as bad as the Nazis.”

Another Holocaust survivor, Magda Brown, was scheduled to speak at the Pittsburgh center on the day of the massacre.  She refused to cancel her speech to high school students, stating, “Now they need to hear our story even more.”

Brown believes that anti-Semitism never die, but only lies dormant waiting for a leader to reignite the embers and inflame the masses.  But unlike Samet, who has grown cynical of mankind, Brown still has faith in humanity.

“I still believe there are more good people than bad,” she affirms, Time magazine reports. “So I’m hoping that the good people are listening.”