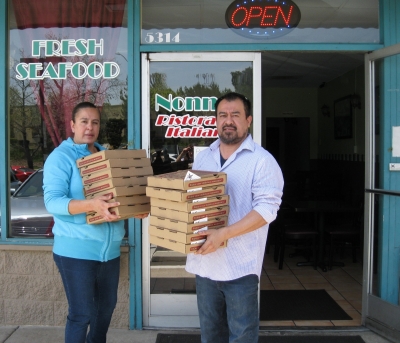 April 1, 2020 (La Mesa) -- So far, 2020 has proven to be a disturbing year, and everyone’s anxiety has been heightened.  The majority of us are staying home and waiting.  I have been teaching my class at Grossmont College online and struggling along. Inspired by stories of folks helping others in these trying times, I also decided to take action in my own small way.

There is a small mom and pop restaurant near my home called Nonno’s. Nonno’s is an Italian restaurant that has been in La Mesa since 1998. The owner, Gerardo Ortiz, came from Mexico many years ago. He is an immigrant success story. Many smaller restaurants are losing business now and I wanted to help Gerardo because over the years, when I ordered pizzas for my ESL class parties, Gerardo always gave us free, extra food. He himself had been an ESL student a long time ago.

In addition, I admire the work all the hospital staff and first responders have been doing and I thought a way to thank them could be by raising money to buy pizzas from Nonno’s for them. First, I contacted my doctor at Kaiser and he told me that Kaiser could not accept outside food.  Then, I called both the chiefs of the La Mesa police and fire departments and left messages, but unfortunately, they did not return my calls.  I had the pizzas pledged, but could not find where to take them. 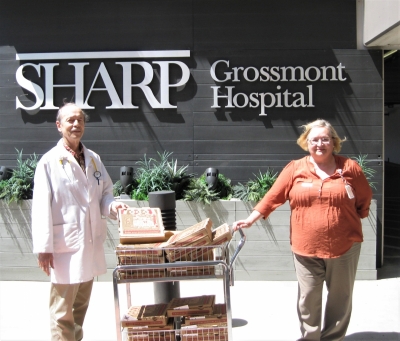 Then, I realized that like so many things in life, you can’t just go in cold, you need a connection, so I called my editor, Donald Harrison, to see if he had any suggestions. He put me in touch with Dr. Franklin Kalmar who works at Sharp- Grossmont Hospital. I called Dr. Kalmar, and he liked my idea.  He spoke to the head nurse and Peggy Woods, the medical staff coordinator. It took a few days, but we were able to work everything out, following certain guidelines.

With some of my savings and the help of generous friends, including Janna Leoff and Edda Temoche, I raised $240 for 20 individual pizzas. Nurse Karen told me they could not share pizza from the same box, so they had to be individual.

On delivery day, I drove to Nonno’s to pick up the pizzas, and then to the hospital as Dr. Kalmar was going to meet me outside at the main entrance. When I got there, there was a large family in front wearing masks, hugging, and crying loudly. There was sadness mixed in with the pleasure of delivering the pizzas. Dr. Kalmar and Ms. Woods met me, picked up the pizzas, and told me they would be shared by the nurses and staff.

I am writing about this experience in order to encourage others to follow their own way of giving back. Several friends I know have contributed. One donated money to Jewish Family Service and the Jacobs and Cushman Food Bank. Another two sewed masks for an assisted living home and a cancer center. The La Mesa Sunrise Rotary Club is helping the East County Transitional Living Center. It doesn’t matter whether it is big or small help, every bit counts and is a welcome distraction from the malaise so many of us are feeling.