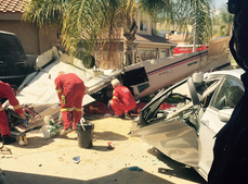 August 3, 2015 (Santee) – A plane owned by a flight school at Gillespie Field crashed into a Santee neighborhood at 9:15 this morning, damaging two cars and a home. The pilot died on impact and a  passenger later died in a hospital of critical injuries, Santee Patch reports. (Photo, left: ECM news partner 10 News.)

The plane, a Piper PA-28 Cherokee, is currently registered to the Volar Corp. 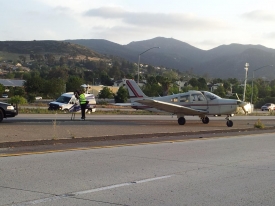 flight school at Gillespie Field in El Cajon, according to Federal Aviation Administration (FAA) records. The same plane made an emergency landing on State Route 52 in 2013 directly in front of ECM reporter Paul Kruze (photo, right), 10 News reports. Back then the plane was registered to Golden State Flying Club, another local flight school.

“We are saddened to hear about the loss of life.  Unfortunately, with 140 to 180 training flights over our homes every single day, it’s a matter of when this would happen, not if it would happen,” she said. “We call upon our elected officials to end this insanity.  Gillespie Field should curtail student flight training over dense residential areas.”

ECM contacted Supervisor Dianne Jacob, who issued this statement:   “The crash is a tragic incident and my heart goes out to the families of the two individuals that were on the plane. It would be premature to speculate on what happened, but I will be closely monitoring the details when they are available."

Santee Patch.com reports that one witness said the plane made a sputtering sound before crashing.

Tommy McCormack, a student who was home sick from school, heard the crash. "I was sleeping this morning, and I woke up from a large explosion,” he told 10 News. “When I walked outside, I heard people screaming 'fire'. I looked to my right, and two houses away, was a plane. It was upside down, and in the front of the plane was a fire."

This is far from the first crash in the area.  At least one plane has previously crash-landed into a driveway of a home near Gillespie, as ECM has previously reported. Others have made emergency landings and yet another dropped a tire through the roof of a Santee condominium at a complex where an ECM reporter lives.

The FAA and the National Transportation Safety Board are investigating today’s deadly crash.