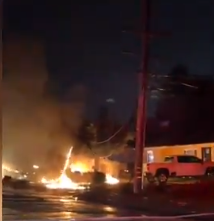 Update December 28, 2021: The FAA reports that four people were on board the plane.

December 27, 2021 (El Cajon) -- A Lear jet owned by Med Jet LLC, an air ambulance company, crashed at 7:15 p.m. tonight at Pepper Drive and North Mollison Avenue in the Bostonia area of El Cajon.  The pilot and any passengers aboard the 10-seat plane are presumed dead following multiple explosions.  There are no reports of fatalities on the ground, ECM news partner Times of San Diego reports.

The crash spewed fiery wreckage across the neighborhood, damaged a vehicle and knocked out power to around 2,500 customers of SDG&E, the utility website indicates. Power is expected to be restored by 6 a.m. tomorrow. Traffic signals are also out in the vicinity.

The plane has been identified as an 880Z en route to Gillespie Field in El Cajon from John Wayne Airport in Orange County. Multiple agencies including Lakeside and Heartland Fire Department, as well as the San Diego Sheriff’s department, responded to the emergency.

Witnesses on social media described hearing the jet engine rev and then a boom, followed by flickering lights and a huge blue explosion, then more explosions.

Audio of the moments before the crash are posted on Youtube. Though it is unclear what caused the crash, the pilot or copilot is heard shouting "Oh, sh*t!" in a startled tone of voice just before the audio ends abruptly: https://www.youtube.com/watch?v=LL9nO035iRk

The crash comes just weeks after a small plane crashed into a Santee neighborhood, killing the pilot and a UPS driver and setting homes ablaze.  Though that flight was bound for Montgomery Field, several other crashes near Gillespie Field have resulted in deaths, injuries and property damage, prompting concerns from area residents.

Acccording to a Tweet sent by the Sheriff, Pepper Drive will remain closed between Topper Lane and North 2nd Street through Wednesday, December 29 as it will take some time for the Federal Aviation Administration (FAA) and National Transportation Safety Board (NTSB) to process the scene.

"Our thoughts and prayers go out to everyone affected by the plane crash," Sheriff Bill Gore tweeted. "If you need to talk to someone or need mental health resources, call the County Crisis Line 24/7 at (888) 724-7240."

The Federal Aviation Administration (FAA) and the National Transportation Safety Board (NTSB) are asking anyone with photos or video of the crash to email it to witness@ntsb.gov.