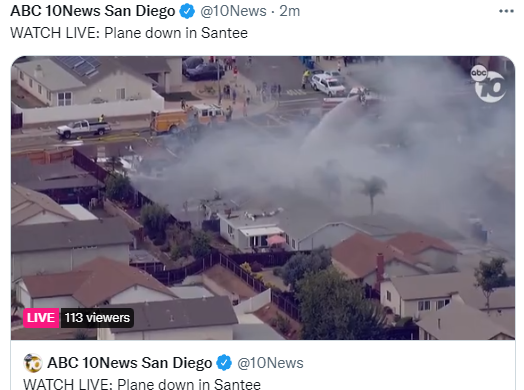 Nadin and Tom Abbott also contributed to this report.

October 11, 2021 (Santee) – A plane has crashed near Santana High School close to the intersection of Greencastle and Jeremy, setting homes nearby on fire.

Two fatalities are confirmed and two others have been transported to a hospital with injuries.

A temporary evacuation point has been set up at the Cameron Family YMCA at 10123 Riverwalk Drive, Santee, for families displaced by the crash.

Santana High tweeted that all students are safe and a secure campus order has been lifted.Students are being allowed to leave if they have no afternoon classes.

An ECM reporter witnessed body parts on roofs and scattered across the neighborhood, adding to the trauma facing residents.

Stephanie Diaz, another neighbor, says the crash occurred at 12:12. "It was just like in the movies," she said of the sound, adding that the whole house shook.

David Witthoft said he used to work on military jets as a mechanic. He said he was in the house when "I heard the pilot go full throttle, and then I heard it hit the ground" with a loud boom. His house filled with smoke and the stench of burning debris, he added.

Numerous homes in the area suffered damage ranging from blown-out windows to cracked solar panels, in addition to two homes destroyed by fire.

Hillcreek Elementary also alerted parents/ guardians that they were "safe and sound."

San Diego Sheriff asks that the public avoid the area. A Hazmat team has been dispatched.

There are reports of a box truck also damaged by the crash.

A neighbor, who asked that her named not be published, told ECM she heard an explosion and had debris fall into her yard. 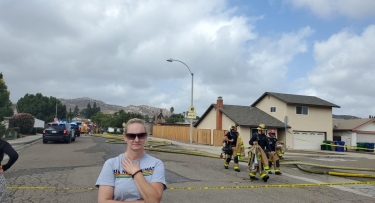 Christine Baldwin (photo, right, by Rebecca Jefferis Williamson) recounts helping to rescue an elderly couple in a corner house that was struck. She says people ran inside a burning home to help rescue those inside.

"An elderly woman was at the window - that's when I ran up and helped her with other people get across the street," she told ECM, adding that she helped  lift the woman out of the window and assist her to reach a neighbor's house.

"Being in the mlitary I was worried there would be explosions, she added. "There were two or three significant little booms after they got the wife and husband out of the house. A lot of us were like, "Get back, get back!"

Update: View video of the rescue published on the Daily News news site in England:  https://www.dailymail.co.uk/news/article-10088223/Moment-woman-rescued-h...

The older woman was asking for her dog and asking what happened, Baldwin recalled. "She was burned on the side of her head and her hair was singed; the husband was in the backyard," she said, adding that he also suffered injuries. "Another gentleman cracked the fence and got it open and was able to get the older man out."

It is unclear what caused the crash, but a high wind advisory is in effect for the area.

The crash is under the flight path for Gillespie Field, in an area that has had multiple past plane crashes.  However the plane was en route from Yuma to Montgomery Field. 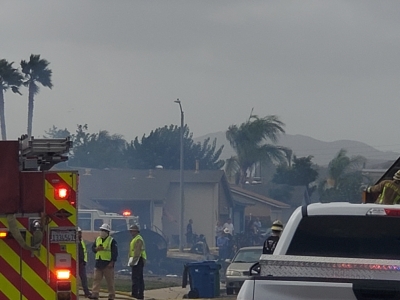