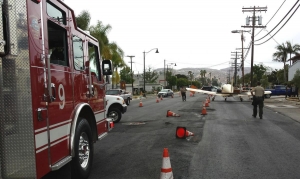 May 17, 2015 (Santee) – The pilot of a single-engine Cherokee plane made an emergency landing Saturday morning on Prospect Avenue near Cuyamaca Street in Santee.

According to ECM news partner 10 News, the pilot and his passenger were traveling from Phoenix, Arizona to Montgomery Field in San Diego when the pilot felt the engine lose power. .He tried to change course to land at Gillespie Field in El Cajon, but couldn’t make it that far.

The pilot coasted to a landing on the street, but struck a parked pickup truck, causing minor damage.  Fortunately, no one was injured.

Heartland Fire & Rescue in El Cajon responded to the crash, along with the Sheriff’s department. The National Transportation Safety Board is investigating the accident.