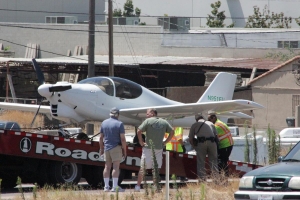 A California Highway Patrol officer noticed the Europa plane attempting to land on the northbound side of the highway and started a traffic break, helping the plane to land safely at the Riverford Road off-ramp, UT-San Diego reported.

The pilot had just taken off from Gillespie Field when the trouble developed and was attempting to return when he was forced to make the emergency landing.  He had flown the plane successfully for several years since building it in 2009.