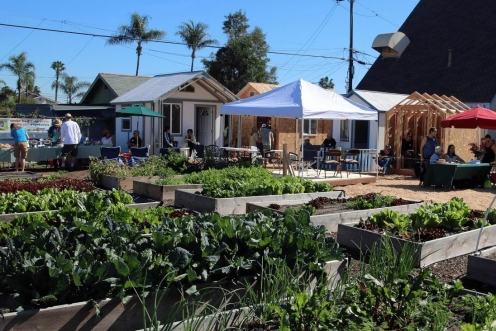 July 26, 2020 (El Cajon) – A proposal to allow construction of emergency sleeping cabins on property owned by Meridian Baptist Church has been approved by the El Cajon Planning Commission and will next be considered by the El Cajon City Council, potentially as early as August 11.

The concept is to create a mini-village, in this case six cabins, with a common shower and restroom facility, social services and potentially other amenities such as food distribution or  a garden. The project would provide safe, temporary housing for homeless women and children, particularly women veterans.

Evie Kosower is director of Amikas, a nonprofit organization that built a pilot model late last year on the site.  The organization has built similar projects in other locations.

“Our homes are insulated with windows,” she told ECM, adding that the homes can also accommodate bunk beds for a woman with one or two children. Residents must be drug and alcohol free. Small dogs may be allowed.

The residents will “learn how to work together and support each other to be more ready to reenter society. We will have case manaers here,” Kosower said. “What we don’t talk about enough is the fact that homeless people need each other. “People on the streets form groups. Very few are loners.” Thus some may resist going into a shelter on their own, without their friends or companions.

The cabins cost only a few thousand dollars apiece for volunteers to build. But there’s still a big need to be filled.

“We need a workshop site,” she said.  “We have to make our own kit. Ours is an adaption.  The pieces fit together, so all you need is a screwdriver…We could pay homeless people to work on it.”  Kosower is hopeful that a school or other location will volunteer space for the workshop to do the woodworking.

“Any church can do this,” Pastor Rolland Slade of Meridian Baptist Church told Baptist Press in an interview published last August. "All that we were doing before was growing tumbleweeds. Where now, if we're able to build this little village of emergency sleeping cabins, we're able to minister to people.”

Amikas raised the funding for the pilot project, a single unit which cost around $4,000 to build. The Rose Society of San Diego has agreed to provide free landscaping as well.

The need for this project and others across our region is likely to increase. “Seniors are getting pushed out, because rents are going sky high,” Kosower said, adding, “More people will be out on the streets for the first time.”

In addition, the COVID-19 pandemic has resulted in many people falling being on rent and mortgage payments after losing their jobs or being furloughed long-term. As moratoriums on evictions end in some areas and neither the state nor federal government has provided long-term protections for mortgage holders, the pandemic may result in an increase in homelessness in coming months.

Amikas has also built a demonstration project in City Heights but voices frustration that thus far, San Diego Mayor Kevin Faulconer has resisted making any city land available for emergency cabins despite the city having the fourth highest number of homeless people in the nation. “We’ve been trying to get this approved in San Diego for over two years, but the mayor is not on board,” Kosower stated.

The emergency cabins could be a viable option for other cities in East County or for unincorporated areas of the county, if several hurdles could be overcome.  One is governmental approval.  Another is adequate volunteer manpower.  A third is workshop space. The fourth is funding, a problem philanthropic donations could help solve.

“We want to build these with volunteer labor, but we need volunteers and we need to fundraise,” Kosower concluded.

To learn more or donate, visit http://amikas.org/ or check their Facebook page at https://www.facebook.com/AmikasBridgeHousing/.