Update June 30, 2018: El Cajon Planning Commission again denied the Conditional Use Permit sought by El Cajon Mortuary and Cremation Service to build a crematorium at its existing site near El Cajon’s city center. The vote was 3-0 at the June 19 meeting, with commission members Mroz and Longoria absent. For details, click here. 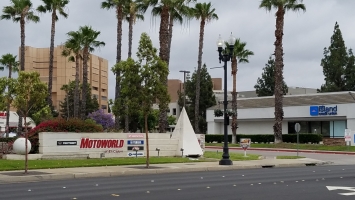 to add cremation services including on-site cremation and viewing, in addition to the offices, meeting rooms and reception areas for funeral services which already exist to his mortuary business he has owned since 1992. The mortuary is located across from a major strip mall a block away from the newly-opened Marriott Courtyard hotel  and a short walking distance from the El Cajon Police Department building, El Cajon City Hall (photo, right, by Paul Kruze) the El Cajon Superior Court Building, and the East County Performing Arts Center all just a couple of blocks away.

Crematories are typically fueled by natural gas and are used to combust and incinerate human remains. Working against El Cajon Mortuary’s application is that because the existing funeral parlor and mortuary have had their downtown location since 1952 before any conditional use permit process or land use restrictions existed, it is legally not allowed to expand or add cremation services.

th the downtown city center now including a new business class hotel (photo, left, by Paul Kruze: Marriott Courtyard) and a refurbished performing art center along with other hospitality type businesses in the offing, a mortuary with cremation facilities is not part of the city’s vision.

In its report the Planning Commission staff says that the mortuary is specifically located in an area designated for uses “associated with office activities.” It cites “Goal 2” of the El Cajon General Plan which states, “the downtown area centered around the intersection of Main and Magnolia will become the center of administrative, civic and cultural activities in El Cajon. Commercial establishments shall be carefully integrated with the surrounding area. Conflicts with residential and other sensitive land uses should be minimized.”

Zakar approached the El Cajon City Council in March 2017 to appeal an earlier planning commission decision denying his previous application for a conditional use permit. The decision was upheld in a 3-2 vote with Councilman Bob McClellan voting “no” and Councilman Ben Kalasho abstaining due to his personal connection to Zakar.

Crematories can only operate in the County of San Diego with permits from the Air Pollution Control Department (APCD), the Department of Environmentl Health, as well as licenses and permits from the State of California. Presently, there are 11 locations in San Diego County with permits to perform cremations, which include eight of human remains, two for animals, and one for hospital biological research. 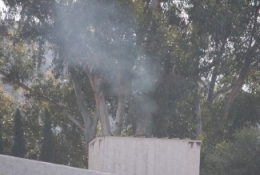 Robert Kard, Air Pollution Control Officer-Director of the San Diego County APCD, says that even outside of urban areas, crematories must follow stringent guidelines and cannot emit any smoke from the facilities.

Kard was the lead investigator when The Neptune Society of San Diego ran into trouble with outdated equipment at its location in Lakeside (photo, right, by Dennis Richardson)  which ultimately led to closure of that aging facility following emissions violations.“

The only thing you should see coming from the smoke stack is the heat rising into the air produced by internal combustion. If you see actual smoke coming from it, you have a problem,” Kard says.

A recent major equipment failure at a National City crematorium recently caused worldwide attention when it spewed effluence across to the parking lots of a nearby Best Buy and Walmart. After being red-tagged by the APCD, Cortez Cremation and Funeral’s furnace was cited for two serious technical violations. At the time of the emergency, ECM’s news partner 10News reported that  the owner at the time claimed that a box caught fire due to ambient heat in the furnace and that the remains were not burned.

The San Diego Air Pollution Control District said there was no public health risk from the smoke in the National City incident.

According to a video of public testimony by Zakar in 2017, Zakar proposes to purchase the same equipment used by Cortez Cremation and Funeral.

Zakar says that there are no crematoriums in El Cajon and currently all cremation services available in East County are carried out off site. “The equipment we plan on purchasing is the latest and greatest in technology and has all of the safety features to avoid any fires and any smoke or pollution,” he says.

In spite of Zakar’s confident words in his proposal submitted to the City of El Cajon Planning Commission and the 2017 City Council session about his proposed facility, the El Cajon Business Partners, a consortium of downtown El Cajon businesses, has also come out against the crematorium. 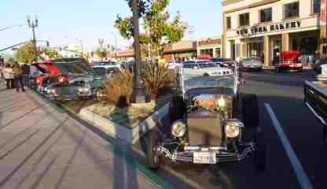 “The way we look at it, the city, the El Cajon Business Partners have put a lot of time and resources into making El Cajon a really good place to be and a fun place to be with the car shows (photo, left, by Miriam Raftery: Classic Cruises car show in downtown El Cajon) and concerts, the restaurants, etc. Now we have the new Marriott. By this time next year we should have the ECPAC open. This is not the place for a crematorium in a downtown urban area. I don’t think people want to stay at the four-star downtown Marriott and look out the window and see a crematorium,” Cathy Zeman, a member of the board says.

“It is a kind of business that has to exist,” Zeman continues, but adds, “I think it belongs somewhere on the outskirts of the city.” She says that she is sympathetic that the accident at the National City crematorium was due to human error, but concludes, “It is just something not good for downtown El Cajon. We can’t afford to have human error situations in an urban area.”

The City of El Cajon Planning Commission staff has recommended to Zakar that he could occupy a parcel of land near Gillespie Field, where the land use regulations could accommodate a mortuary that offers cremation services.

Should the Planning Commission In an unlikely event decide to go against the recommendation of its staff, the crematorium could be operational within three-to-six months. Ultimately, however, the City Council would have the power to make the final say-so.

The El Cajon Planning Commission will consider the matter at its Tuesday, June 19th meeting at 7 p.m. in the El Cajon City Council Chambers.

Muslim Bans, Need for Military Parades, Rise in White Supremacist and Neo Natzi Hate Crimes, School-kid Massacres, using a Border Crossing to separate young Children from Parents, Winning no matter how it’s done or who gets hurt along the way is Authoritarianism while White House gives us a constant, unending, and verifiable Stream of Lies to our Faces.This is a Creamatorium that is reducing our Democracy to Ashes. MAGA this way? No Thank You.

Must you politicize everything? Take a break man.

Not sure where or how you made that connection in this editorial. Get the help you so desperately need.
I'm very happy that this permit was denied. Individual residents were NOT NOTIFIED of this cremation service request! I found out from a nearby business owner who I'm friends with. The business is located adjacent to neighboring houses, apartments and many other businesses. The air quality in El Cajon is bad enough (Restaurants cooking with wood) at times, we certainly don't need more pollution. Thank you to everyone involved in stopping this atrocity.