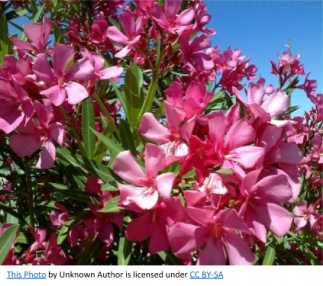 August 19, 2020 (San Diego) – Health experts are warning the public to steer clear of deadly plant extract, Oleandrin, being touted by financial backers of President Donald Trump as a potential “cure” for COVID-19.  There is zero proof that it works beyond a test tube (in a single non-peer reviewed study) and it has never been tested on humans.

All parts of the oleander plant are highly toxic and may be fatal, Forbes Magazine reports, citing North Carolina University  It may be the most poisonous plant in the world.  According to Memorial Sloan Kettering Cancer Center, consuming a single leaf can kill you, causing heart arrhythmia, gastrointestinal symptoms, respiratory paralysis, coma or even death. A common landscaping plant in Mediterranean climates including Southern California, oleander is among the most poisonous plants in the world, responsible for many poisonings each year worldwide.

Axios reports, “To the alarm of some government health officials, President Trump has expressed enthusiasm for the Food and Drug Administration to permit an extract from the oleander plant to be marketed as a dietary supplement or, alternatively, approved as a drug to cure COVID-19, despite lack of proof that it works. The experimental botanical extract, oleandrin, was promoted to Trump during an Oval Office meeting in July.”

So who is behind it? According to Axios, “It's embraced by Housing and Urban Development Secretary Ben Carson and MyPillow founder and CEO Mike Lindell, a big Trump backer, who recently took a financial stake in the company that develops the product (Phoenix Biotechnology).”

Lindell has also talked of introducing a dietary supplement to be sold over the counter containing the poisonous substance – a prospect that alarms some health experts.

Medical ethnobotanist Cassandra Quavre warns, that  a “pre-print article – that is, an article not peer-reviewed by other scientists – is now online. It reports how, in a test tube, oleandrin reduces production of the virus responsible for COVID-19. But this does not take into account the well-known cardiac toxicity of the chemical when consumed by an animal or human.”

While many substances could potentially destroy a virus in a test tube, that doesn’t make them safe for people to ingest. You wouldn’t swallow gasoline or plutonium or a toxic pesticide, for example, even if such a substance were shown capable of killing the virus.

Dr.Quavre adds, “Particularly worrisome is the idea that consumers may misinterpret any publicity surrounding oleander and try to self-medicate with this highly poisonous plant. I’m also concerned the dietary supplements industry may try to take advantage of the public’s fear of COVID-19 by developing supplements containing oleandrin… oleander is particularly dangerous, because ingesting any part of the plant can lead to serious illness and possibly death. What’s more, there is no published scientific evidence on the safety of consuming oleandrin or its plant source, Nerium oleander.”

She concludes, “It is critical that the Food and Drug Administration and its commissioner, Dr. Stephen Hahn, make certain the public is protected from this poison.”

I suppose eating oleanders is sane, after you've munched on Tide Pods™.

When I was in the Boy Scouts, some 'city Boy Scouts' fueled their campfire with oleander wood.  We had to take the whole patrol, 8 boys and one Father, to the hospital.  A couple of them, those who tended the fire and inhaled most of the smoke, spent a week there.

you. The boys are lucky that they survived.

Oleanders were once widely used as landscaping on roadway medians, but have been removed in many areas because of their toxicity (even though they are low-water use shrubs).