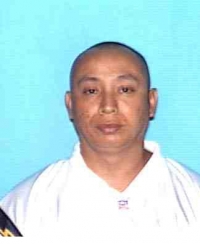 August 11, 2010 (San Diego) -- San Diego Police Department Homicide Unit detectives arrested 35 year-old Quang Van Dang  at 6 a.m. this morning for the murder of a woman in the Oak Park area, just west of Lemon Grove. Quang was located by Homicide Unit investigators in the 5400 block of Fieger Street, a short distance from the crime scene.

Last night at 11:20 p.m., officers responded to a report of a stabbing at a residence in the 5100 block of De Burn Drive. When officers arrived, they found a 27 year-old woman suffering from a stab wound to the chest. Paramedics arrived and transported the victim to a local trauma hospital, where she died at 12:18 a.m.

The preliminary investigation has revealed that the victim and suspect were inside their home when they became involved in an argument. During the argument, the suspect stabbed the victim and fled the scene. Patrol officers searched the area of the residence thoroughly and mounted a manhunt for Quang, who fled on foot.

Anyone with information  on this crime is encouraged to call San Diego Police or Crime Stoppers at (888) 580-8477. The victim has been identified, but her name is being withheld pending family notification.

The scary thing is that most acts of violence are committed by someone the victim knows. He killed the mother of his small child. Too bad there is no home security system for that.

Attacks like this happen far too often. It is a major reason that I bought a home security system. The fact that people are willing to come into your home and harm you is scary.