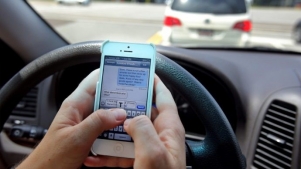 April 7, 2017 (La Mesa) -- April is recognized as National Distracted Driving Awareness Month.  In California, the Office of Traffic Safety (OTS), the La Mesa Police Department, CHP, local law enforcement, and community partners throughout the state are working together to make the roads safer by highlighting the dangers of being distracted while driving, especially by cell phones.

“Law enforcement would rather see everyone off their cell phones than hand out a lot of tickets,” said Rhonda Craft, director of the Office of Traffic Safety.  “Take care of calling, texting, setting your GPS and everything else before you hit the street.”

Lawmakers agree that distracted driving continues to be a growing problem among California’s motorists.  Assembly Bill 1785 went into effect on January 1, requiring all drivers in California to keep their cell phone out of their hands while operating a motor vehicle.  Under the new law, a driver may activate or deactivate a feature or function of the cell phone or wireless communication device by swiping or tapping its screen only if it is properly mounted or not being held in a driver’s hand. Specific information on the new law can be found at www.ots.ca.gov.

The Office of Traffic Safety will begin a new public awareness campaign throughout the state in April emphasizing how the new law makes virtually all hand-held cell phone activity illegal – talking, texting, and using apps. The campaign aims to end distracted driving through education and raise awareness about the associated dangers.  The goal is to change motorist behaviors and save lives, not just in the month of April but year-round.

The National Highway Traffic Safety Administration (NHTSA) reports that 3,477 people were killed and an estimated 391,000 injured in motor vehicle collisions involving distracted drivers in 2015. That is a 9 percent increase in fatalities as compared to the previous year.

The La Mesa Police Department will join other law enforcement agencies throughout the state to provide educational experiences as well as zero tolerance enforcement efforts to discourage distracted driving.  Officers will have a special emphasis this month on enforcing all cell phone and distracted driving laws. The goal is to gain voluntary compliance by drivers, but sometimes citations are necessary for motorists to better understand the importance of driving distraction free.

The La Mesa Police Department is deploying extra traffic officers with grant-funded resources in city locations with higher numbers of traffic collisions. Violators will be stopped and cited with fines set at $162 for first time offenders.  This campaign is funded by a grant from the California Office of Traffic Safety, through the National Highway Traffic Safety Administration.