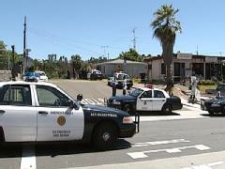 June 6, 2011 (San Diego) –San Diego Police Department’s homicide detectives seek public help to locate the driver and occupants of a 1990s burgundy Cadillac with chrome rims. This afternoon at 2 p.m., a passenger in the vehicle shot and killed a 24-year-old man standing in the 600 block of Chester Street, one block east of 69th Street in the Skyline neighborhood.

According to SDPD Homicide Detective Kevin Rooney, the vehicle slowed down near the victim and the occupants spoke briefly with him.

ECM news partner 10 News reported that SDPD spokesman Gary Hassen indicated the suspect was described as six feet tall, 225 pounds, wearing jeans and a white shirt. After the shooting, the vehicle drove onto Imperial Avenue and was last seen heading westbound in the 6900 block of nearby Lisbon Street.

The victim, who was reportedly shot in the chest, was transported to a trauma center, where he died at 5:56 p.m. The victim has been positively identified, but his name will not be released until family members have been notified. Motive for the shooting is not known.