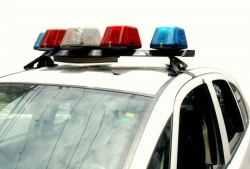 Last night, at 8:55 p.m., officers were dispatched on a radio call of an armed robbery that had taken place at a restaurant on Navajo Road.  Officers arrived and learned the suspect had entered the business carrying a handgun, with a bandana covering his face.  The suspect approached the clerk at the counter and demanded cash. The owner of the business was in the office at the time, heard the commotion, armed himself and confronted the suspect.  When the suspect pointed the gun at the owner, the owner shot the suspect.

The suspect fled on foot through the parking lot to a waiting car.  The car was last seen driving southbound on Golfcrest Drive.  Witnesses described the suspect as a black male, wearing a dark hoodie, having a bandana covering his face and wearing jeans.  The vehicle was described as a red convertible with a black top.

At 9:11 p.m. officers were dispatched to a radio call of a man who had been shot and was in need of medical attention.  Citizens in the 4100 block of 40th Street found a man staggering along the sidewalk, who told them he had been shot.  Medics arrived and transported the man to a local hospital, where he died as a result of his injuries at 10:12 p.m.

Homicide detectives are continuing to investigate both incidents, to determine if they are related.  Witnesses have described the robbery suspect and the deceased male as having similar physical descriptions.  The deceased male has not been identified.  Detectives and forensic specialists are currently processing both scenes for evidence and trying to locate witnesses.