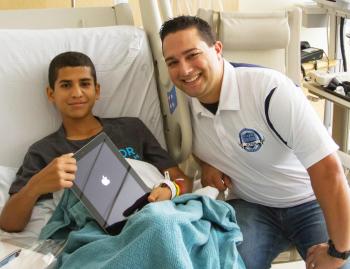 June 6, 2014 (El Cajon) – The El Cajon Police Officers Association (ECPOA) has pitched in to try and lift the spirits of an immigrant teen who suffered life-threatening  injuries trying to save his mother’s life.

The boy, 15, nicknamed “Buddy”, moved to  El Cajon 15 months ago with his mother and adult brother, after his father was kidnapped in Iraq.  His father has not been seen or heard from since, and is presumed dead, said Travis Howard, vice president of the ECPOA.

But now, Buddy is without both parents--and his brother.

The teen had been making friends at a local high school and getting involved in the El Cajon Boys and Girls Club, all while trying to learn English and excel in his school work.

“His story is not unlike many other kids who have come to this area seeking to escape the violence in the Middle East and live a normal life,” said Howard.  “However, his life was turned upside down and will never be the same.”

On May 30th, “Buddy” was at home when he heard his mother scream.  He ran to his mother’s aid and found her being attacked by his older brother, according to police. Due to the ongoing investigation, police have not released details as to the motive.

“Buddy immediately shielded his mother and fought to protect her,” Howard told ECM, adding that the teen received serious injuries trying to keep his mother safe.

But when paramedics arrived on scene, Buddy learned that his mother had died.  His brother has been arrested. 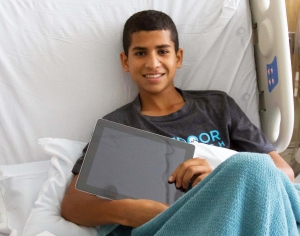 Buddy was rushed to the hospital, where he is still recuperating from his wounds.  His nearest family member is his uncle who lives in Colorado.  When Buddy is released from the hospital, he will have to move to Colorado and leave his teachers and friends who he has come to know and love here in El Cajon, starting a new life over in a distant place yet again.

When the ECPOA heard of Buddy’s story, they wanted to find some way to help Buddy get through this incredibly hard time.  So they decided to give Buddy an iPad so he can be entertained while he recovers in the hospital and use it to keep in touch with his friends when he has to move away.

“Buddy was excited to see and begin playing with his new tablet,” Howard concluded. “ We understand an iPad cannot change what happened to Buddy, but we hope that it will bring him some happiness during a very difficult time in his life.

If you wish to provide additional help to Buddy, you can contact ECPOA Vice President Travis Howard at thoward@elcajonpoa.org.