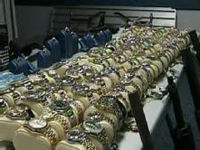 January 3, 2011 (San Diego’s East County) -- San Diego Police Department Robbery Unit detectives have recovered the watches believed to have been stolen in a series of violent “smash and grab” robberies that occurred throughout the state.

The incidents, that took place in Costa Mesa, San Jose, Palm Desert and San Diego between August and October, involved suspects armed with firearms using sledge hammers to smash jewelry cases in the take-over robberies.  The suspects then scooped up over a million dollars worth of expensive watches.  In the San Diego case, the suspects drove a vehicle through the pedestrian area of Fashion Valley Mall to get to the jewelry store.
San Diego Police Department Robbery Unit detectives worked with investigators from the other agencies to investigate the cases. On November 8, 2011, the San Jose Police Department identified Ryan McKnight (34) as one of the suspects in their jewelry store robbery, which occurred in mid-October. On November 9, 2011, Riverside County Sheriff’s Department identified McKnight as one of the suspects in their jewelry store robbery, which occurred on October 26, 2011.
On November 9, 2011, McKnight and Robert Chavira (40) were arrested. Both McKnight and Chavira are on active parole and were arrested for parole violations. During searches that were conducted after the arrests of McKnight and Chavira, evidence was located that suggests they may be involved in the robbery at Barona Casino on November 9, 2011.
In late December, detectives received information that a large quantity of Rolex watches were being stored at a Park West apartment.  Detectives determined the watches were those taken in the statewide robbery series.