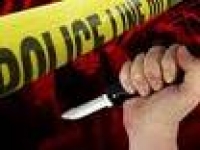 July 29, 2018 (El Cajon) – A man stabbed in front of a 7-11 store in the 700 block of Jamacha yesterday afternoon died after being transported to a local hospital, says Lt. Walt Miller with the El Cajon Police Department.

Soon after the stabbing, reported at 2:05 p.m. Saturday, officers responded to a burglary at an apartment in the 1200 block of north Mollison.  They took a burglary suspect to a hospital  for medical issues unrelated to his arrest, according to Lt. Miller.

“Investigators are exploring the possibility that this suspect may be related to the stabbing based on a physical description provided by witnesses,” said Miller. That suspect’s identity has not been released. However a second suspect may still be at large.

Police are still looking for the second possible suspect. He is described as a light to dark-skin male, 25-30 years old, brown hair, brown eyes, 5 ft. 5 inches to 5 ft. 8 inches tall, with a slim build.

Investigators are also  trying to determine a motive for the stabbing, who the suspected stabber is, and if the victim and suspects knew each other prior to this incident.

Anyone with information about this incident is encouraged to call the El Cajon Police Department at 619-579-3311.