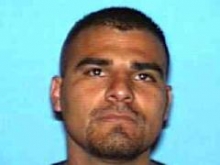 September 11, 2011 (Lemon Grove)—Chula Vista Police have issued a bulletin asking the public to be on the lookout for Francisco Ramirez, 34. The Lemon Grove resident is suspected of abducting his son, 11, and two daughters, one 9 years old, the other 1 year 9 months. He may have taken them to Mexico in a silver GMC Yukon sport utility vehicle.

The children's names are Francisco, Xitlali, and Bridget.  Their last name is Ramirez-Leon.

Ramirez was legally visiting the children at their aunt and uncle's apartment when he disappeared with the children, Chula Vista police Lt. Don Redmond told the Union-Tribune yesterday. According to Police, an aunt and uncle had been awarded custody because of domestic violence issues between Ramirez and his ex-wife.

Ramirez is described as Latino, 6 feet tall, 180 pounds, with brown eyes and hair. Police said he was wearing a black T-shirt and dark jeans and driving a silver GMC Yukon sport utility vehicle.

Since someone bothered to established Ramirez' legal right to visit his children, was there an equal effort to establish Ramirez' right to be in the country? Why would a legal resident rush off to Mexico? Isn't that a foreign country in the throes of a war with drug lords, with multiple murders on a daily basis? Shouldn't Ramirez be charged with endangering his children in addition to abducting them? If he isn't a terrorist he sure is behaving like one. And I'll bet that SUV is really all black with tinted windows, not silver. Notify Homeland Security! Ramirez was last seen 'wearing shoes' a clear point of interest to Homeland Security.