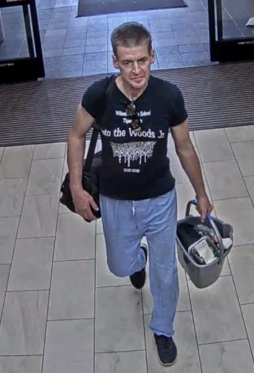 September 7, 2018 (San Diego) — Crime Stoppers is offering a $1,000 reward for information leading to the arrest of a man who made lewd comments to two 13-year-old girls in the elevator at Kaiser Permanente Zion Medical Center on the morning of August 25th.

The girls told authorities that the man told them they “looked pretty” and said he wanted to have sex with them, San Diego Police report.  He also tried to hug the girls and kissed one of them on the head.

Hospital surveillance video shows images of the man entering the building and exiting the elevator on the hospital’s main floor, before heading toward the front entrance. 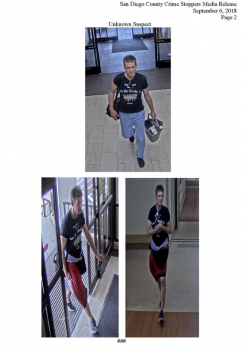 The victims notified a family member who contacted police, but the suspect had already left the building when police arrived.

Anyone with information about the case is asked to call San Diego County Crime Stoppers at (888) 580-8477 or contact the agency online at sdcrimestoppers.org. Tipsters may remain anonymous and could be eligible for a reward of up to $1,000.

Wearing what appears to be 'Scrubs' and carrying a bucket that looks like it has cleaning supplies or something in it. Attempting to pass himself off as an employee? "Bad Boyz, Bad Boys, whatcha gonna do when they come for you"?