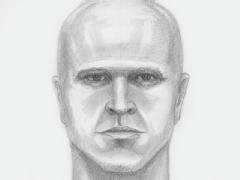 November 30, 2011 (Escondido) – Escondido police today released a sketch of a man who reportedly assaulted a 15-year-old girl who was walking to school. The girl told police that the man, who was dressed all in black, pushed her to the ground beside his white station wagon and tried to sexually assault her.

The attack occurred Tuesday around 6:30 a.m. near Jefferson Avenue and North Rose Street in Escondido. Fortunately the victim was able fight off the attacker, run away and call 911.

She described her attacker as a muscular, bald-headed white man in his 30s with crooked teeth and thick blond hair on his arms. He was approximately 6 feet 2 inches tall and wore a faded black T-shirt and black jeans, along with black work shoes.

The victim told police that the man fled in a white 1990s station wagon with a black stripe on its side, ECM news partner 10 News reports.

Parents have been notified of the attack by Orange Glen High School and other schools in the district.