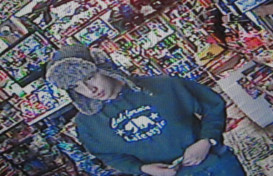 May 4, 2013 (Spring Valley) – San Diego Police seek public help to identify a young man in a hunting cap who cashed in winning lottery tickets at convenience and liquor stores in Spring Valley.  Police indicate the tickets were from stolen lottery ticket dispensers taken from a San Diego gas station on two occasions. The thefts occurred at the Arco station at 4333 Home Ave on April 5 and on April 18,.

The suspect allegedly ripped the lottery ticket dispensers from the counter while the clerk was in a back room, then fled. He was seen getting into the passenger side of a dark-colored sedan, possibly a late model Honda Civic, detectives said.

Shortly after each incident, the winning tickets were cashed in at convenience stores and liquor stores on Grand Avenue and Bancroft Drive in Spring Valley, according to police and Crime Stoppers.

Anyone with information on the suspect or his whereabouts was asked to call the San Diego Police Department's Southeastern Division at (619) 527-3500, or call Crime Stoppers anonymous tip line at (888) 580-8477, or contact them via email or text message at sdcrimestoppers.com.