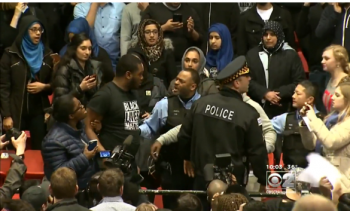 Photo: Screenshot from CBS video of Chicago rally after cancellation was announced

But Chicago Police spokesman Anthony Guglielmi today told CNN that Trump’s claim was “absolutely untrue…No one from the campaign contacted the Chicago Police Department and we were not involved at all in canceling the event.”  He added that a Secret Service officer standing next to him when the announcement  of cancellation came in was also surprised.

Earlier on Friday, a Trump rally in Ohio was disrupted by a man who tried to rush the stage, startling Trump.  Secret Service detained the man.

Trump today claimed the man’s action was “probably ISIS or ISIS-related.” He described a video on the man’s Twitter account that showed student protesters stepping on a flag.

But Trump apparently lied or was mistaken about this, too, the Chicago Tribune reports.  Hassan Hassan, author of the book Isis: Inside the Army of Terror”  said the images were “definitely not an ISIS video.”

Charles Lister, a Middle East Institute fellow, agreed, saying that “the video is incontrovertibly fake and Trump’s accusations about it being linked to ISIS serve only to underline the totality of his ignorance on this issue,” Associated Press reported. Lister noted the video contained uncovered women and other elements that a true jihadi video would never contain.

Trump has drawn fire for inciting violence at numerous recent rallies, openly calling for the crowd to rough up protesters and stating that he wanted to punch a protester in the face.  One of Trump’s followers did just that, punching a black protester in the face, and was later arrested for his action.

All other presidential candidates in the race, both Republican and Democratic, have called on Trump to denounce violence, CNN reports.

Republican Senator Marco Rubio of Florida denounced Trump for inciting the audience to “rough up anyone who stands up and says something he doesn’t like.” He said anger from voters could lead to America being “ripped apart at the seams.”

Texas Senator Ted Cruz, also a Republican, said that unlike Trump, “I don’t ask people in the audience to punch people in the face. I don’t ask them to engage in physical violence against protesters.”

Democratic candidate and former Secretary of State Hillary Clinton said of Trump today, “If you play with matches, you’re going to start a fire you can’t control.  That’s not leadership. That’s political arson.”

Trump accused supporters of Vermont Senator Bernie Sanders of being behind student protests at a university in Chicago, where his event was postponed.  “Some represented Bernie, our communist friend,” Trump taunted his Democratic rival.

Sanders fired back, “As is the case virtually every day, Donald Trump is showing the American people that he is a pathological liar.”

Today Trump refused to acknowledge any role in inciting violence or protests against his violent statements. Instead, he called for the arrests of protesters to “ruin the rest of their lives.”

Negative publicity about Trump’s incitement of violence may be having an impact on voters. Today the Wyoming Republican Caucus was held.

Trump, who had previously been on a winning streak, placed third with a scant 7% of the vote.  Cruz came in first with 66%, while Rubio just under 20%, with all precincts counted.

In addition, Washington D.C.'s Republican caucus put Rubio on top with 37% and Ohio Governor John Kasich second with 36%, followed by Trump with 14% and Cruz with 12%.

To use a favorite Trump term, today he was a “loser.”

I just googled "Trump lied" news and the East County Magazine leads the pack and in fact is the only entry covering these particular Trump lies. Miriam scores again.