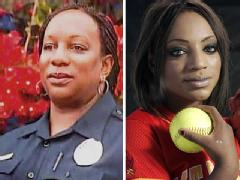 July 18, 2011 (Rancho Penasquitos) – Donna Williams, a 32-year-veteran of the San Diego Police Department assigned to the child abuse unit, has been found stabbed to death along with her daughter, Breanna "Bree" Williams, at their home in Rancho Penasquitos.  Donna Williams has worked on many high-profile cases involving children,  including the Danielle Van Damm case.

Brian Williams, 24, has been arrested for the crimes. He is the son of Donna and her late husband, Howard Williams, who was a retired sergeant with the Department.

At 1:22 a.m., San Diego Police officers responded to a 911 call of a violent disturbance taking place and a female screaming for help at the home in the 98900 block of Paseo Montril. Officers arrived within minutes and discovered Breanna Williams, 18, suffering from knife wounds in front of the house, SDPD reports.

The officers also discovered the victim’s older brother, Brian, in the front yard. He was arrested as the suspect in the attack. The officers called for paramedics, but they were unable to save the victim and she died at the scene.

Upon checking the residence, the officers discovered a second deceased victim of the attack, Donna Williams, 52, the suspect’s mother. She had also suffered from knife wounds in the attack.

The preliminary investigation has only revealed there was a disturbance between the son, mother and daughter. The motive for the attack is unknown at this time.