Flame wars:  A hallmark of Alpine politics is the blunt and rambunctious public discourse, including often contentious group e-mails.  But this one may be the pithiest put down yet.

Lou Russo, a member of the Alpine Community Planning Group and former chair of the Rural Fire Protection District, objected to a notice of a new fire fee schedule. He fired off a pugnacious email to retiring Alpine Fire Chief Bill Paskle. The email, cc’d to media outlets, reads: “Say it ain’t so. You said during the town halls proposing annexation our fees would go down!  A special place in hell awaits you Bill.”

Chief Paskle blasted back, “Lou, on reflection of your email below…thank you, but no. I have no intention of spending eternity with you.” 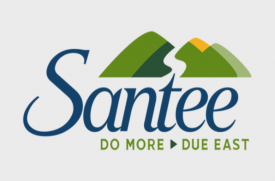 Do more, due East: That’s the new Santee slogan adopted by the City Council for the city’s 40th birthday. The city spent over $80,000 for rebranding to Tennessee-based North Star Destination Strategies, which included a new logo, too.

On the Santee Today Facebook page, however, residents voiced views that were overwhelmingly critical – and a few posted alternative slogans ranging from serious to sarcastic. Here is a representative sampling:

Michael Carter I like it except for the "Do more; Due East." What does that even mean?

Steve Mendenhall Due East of where? Due East of Lakeside, Alpine etc...? Don't like it at all...

Eric Maggio We really should come up more accurate alternate slogans. Any ideas?

Brandon Hatton I guarantee some of the kids at Santana or West Hills could have done astronomically better. Coulda given them a 10k scholarship and came out 70k ahead

Daniel Goar That’s a very modern and streamlined look. Kudos to the city of Santee for a remarkable job!

Otero drew controversy at Cajon Valley for a construction contract awarded to her son. She is also a defendant named in a civil rights lawsuit filed against the district. The district has drawn criticism on her watch for multiple district schools flagged due to failing state academic standards, as well as for high expenditures on travel and promotional videos. But it’s drawn positive profiles in national press for its World of Work Program and other innovations in education.

Though Otero is no longer on the CSBA, East County will still have a voice on the board through Emma Turner from the La Mesa-Spring Valley School District, the CSBA’s immediate past president.