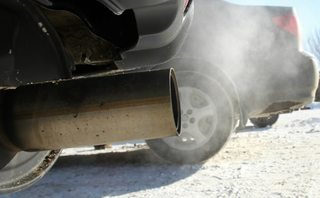 By Suzanne Potter, California News Service
Photo: Tailpipe emissions, CC by SA via Bing
January 29, 2020 (Sacramento) --  A new poll suggests carmakers that support the Trump administration's attempt to roll back clean-car emission standards may be undermining their standing with their customers. Toyota, General Motors, Fiat Chrysler, Subaru, Nissan, Mazda, Hyundai, Kia, and Mitsubishi support the feds in a lawsuit to prevent California from establishing tougher emissions standards than those set by the federal government.
Pollster Matt George said his firm questioned 1,000 Toyota owners and found the company's reputation takes a big hit once people find out about the lawsuit.
"In terms of the perception of Toyota being a 'green and sustainable company that takes care to be environmentally friendly,' at the outset of the poll, 90% of Toyota consumers would agree with that statement. At the end of the poll, after they found out more information, 55% agree," George said. "So, that's a pretty significant drop."
Other car companies have taken a different approach. Volkswagen, Ford, BMW and Honda have agreed to adhere to California's stronger standards, which have been adopted by 14 other states. Toyota did not immediately respond to a request for comment. The Trump administration has said the lower standards will translate to lower sticker prices.
However, Shannon Baker-Branstetter, manager of cars and energy policy for Consumer Reports, said the government's own analysis shows the lower emissions standards would hurt fuel economy - and cost drivers an average of $1,400 more a year in gas.
"The stronger fuel economy and greenhouse gas emission standards improve both consumer pocketbooks and reduce pollution, and so that really is a win-win," Baker-Branstetter said. "However, rolling back the rule will increase pollution, as well as cost consumers money."
Clean-air advocacy groups are hoping more public awareness will pressure the feds to withdraw the lawsuit and allow California to keep its high standards. George said the poll showed only 15% of Americans are following the lawsuit closely - and that number is only slightly higher in California.
"The number in California is only 20% - only 5% higher than the national average, for a lawsuit that is going to directly impact emissions standards within that state," George said.
The poll also found 1 in 4 Toyota owners, particularly those ages 18-34, would consider switching brands after hearing about the company's stance on clean-car standards.