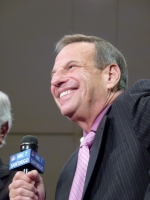 “Despite being outspent and out-advertised by his general election opponent in the run-up to the June 5 primary, Filner’s longstanding record of service in San Diego and his closer alignment to the values held by voters who will cast ballots in the November 6 presidential election provide him a significant advantage in the runoff,” said Evan McLaughlin, a spokesman for the San Diegans for Bob Filner for Mayor 2012 committee.

The poll was conducted by Fairbanks, Maslin, Maullin Metz & Associates of Santa Monica, Calif. between June 28 and July 2. Respondents were registered to vote in the San Diego Unified School District, which is wholly encompassed in the City of San Diego, and were registered with political parties at a rate that mirrors the expected party registration for November: 42 percent Democratic, 29 percent Republican, and 29 percent declining to state or preferring another party.

From the FM3 poll:

As you may know, San Diego mayor Jerry Sanders is term-limited and therefore cannot run for reelection.

If the general election for Mayor of San Diego were held today, for whom would you vote if the candidates were: (RANDOMIZE) (IF UNDECIDED, ASK:) "Toward whom do you lean?"