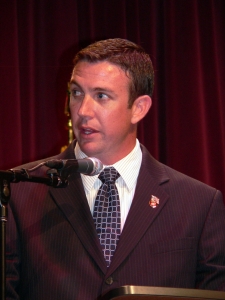 August 28, 2018 (San Diego) – In his prior five campaigns for Congress, Duncan D. Hunter waltzed easily to victory over his Democratic opponents with margins of victory ranging from 17% in 2016 to a whopping 42.8% in 2014. But a new poll by Survey USA of likely voters released Monday, days after Hunter’s indictment on federal corruption charges, shows him with a mere 7%  lead over Democrat Ammar Campa-Najjar.

The poll, conducted after the indictments were announced, found Hunter with 47% to Campa Najjar with 39%. But 13% of those polled said they remain undecided—and they could swing the race. The poll also has a margin for error of 5.5%.

The 7% lead was the same among voters aware of the indictment and those unaware of it, though the poll cautions that as more information becomes known about the indictment details, opinions could shift.

The poll found clear differences based on voters’ backgrounds.

Hunter leads among older voters, suburban and rural voters, while Campa-Najjar leads among voters under age 35 and urban voters.

In prior races, Hunter won by far larger margins than he currently has according to the poll. The district lines have been redrawn since 2008, when he first won election, and the district number has changed from the 52nd to the 50thCongressional District.

In his first run for Congress in 2008 after his father of the same name retired, Hunter defeated retired Navy Seal Mike Lumpkin 57% to 39%, an 18 point margin.

But several factors make the 2018 race different than earlier contests.

First, reapportionment that went into effect made the district slightly less red than in those early races, though Republicans still have a strong registration advantage.

Second, Hunter has never faced a well financed opponent before. Campa-Najjar had raised over a million dollars even before the indictments were announced.  A former White House intern who later served in the Obama administration’s Labor Department and also worked for the Hispanic Chamber of Commerce, Campa-Najjar has been endorsed by former President Barack Obama. 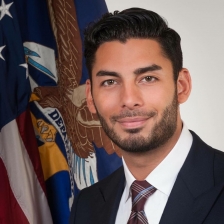 Since Hunter’s indictment, three progressive PACS are investing new resources to defeat him in the CA50 congressional race. Indivisible Action, Flip the 14 and Code Blue are partnering with the local grassroots group Independent Indivisible, known as Indi Squared, to expand a field operation targeting Democratic voters who skip midterm elections.

Third, as details of Hunter’s indictment become known, even some supporters may opt to withhold support by not voting, or cross party lines. Hunter is accused along with his wife, Margaret, of diverting a quarter million dollars in campaign funds for personal use. That included falsely claiming family dental bills were for a charitable organization, and falsely claiming clothing for Hunter purchased at a golf shop was golf balls for wounded veterans—actions that could be troubling for the district’s large military and veteran populations.

Hunter and his wife pled not guilty last week to all charges. He has characterized the investigation as a “witch hunt” and claimed the indictments are politically motivated.  (See our prior coverage.) He also attacked media for covering the scandals, claiming that throughout the two-year investigation, “I have not had one opportunity to present my side of anything in this investigation or to counter any allegations against me. All the while, there has been a constant barrage of misinformation and salacious headlines in our media regarding this matter."

As his poll numbers wane, Hunter and his backers have lashed out with attacks on Campa-Najjar’s ancestry.   Hit pieces have called his Palestinian grandfather a “terrorist” suspected of involvement in the Olympic bombing of Israelis.  Campa-Najjar, a Catholic raised by his Mexican-American mother after his Palestinian father left the family when he was a small child, never met his infamous grandfather who died two decades before Campa-Najjar was born.

Campa-Najjar, who passed a security clearance when he worked at the White House, responded to the attack  by stating, “Duncan Hunter Jr. must be desperate. He has to dig back three generations to attack me, all I have to do is look back three days ago at his indictment.”

The Democratic candidate then wrote, “This is the grandfather I knew and loved, his name was Celso Campa. Abuelito was an orphaned migrant worker turned police officer. [photo] When my parents divorced, it was my abuelito Campa who took us in and let us stay with him. He was a beautiful man, helped treat my first bee sting, taught me to work with my hands, had a contagious laugh, and a generous soul. I use to put his eye drop medicine in his eyes every night before bed, I found him in his room the day he had a stroke. I watched him lose the battle with Alzheimer’s. His wake was one of the hardest experiences of my childhood, and that’s saying a lot. He couldn’t remember me in the end, but I’ll always remember him. I knew abuelito Campa personally, he was a father to me.” 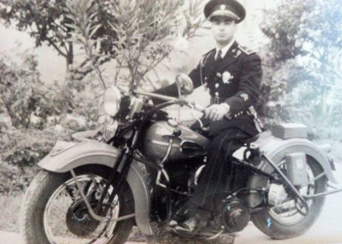 Campa-Najjar calls the 2018 race a “redemptive election,” adding, “I love this country because it's a place where the ultimate comeback stories are written — including my family's own story. Only in America can the son of a Hispanic woman from the barrio and an Arab man from a war torn place have the freedom to reimagine his life and pursue his dreams.

This election, we’re going to reaffirm who we are as a nation: A country that welcomes all, regardless of their appearance, name, or where their family came from. Let's condemn xenophobia everywhere, and embrace diversity everywhere. Let's explore unity, not exploit division.”