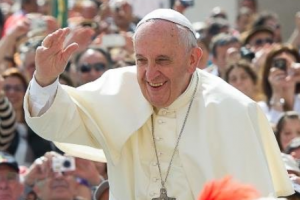 March 27, 2016 (San Diego) – On Good Friday, Pope Francis washed the feet of European immigrants including Christians, Muslims and Hindus, demonstrating his outreach to people of all faiths and calling for world peace.

In his Easter Sunday mass at the Vatican, the pontiff stated, ““This day invites us not to forget those men and women seeking a better future, an ever more numerous throng of migrants and refugees, including many children, fleeing war, hunger, poverty and social injustice.”

He also criticized those who seek to stop migrants fleeing persecution in the Middle East and North African from seeking a safe haven in Europe and other regions.

"All too often, these brothers and sisters of ours meet along the way with death or, in any event, rejection by those who could offer them welcome and assistance,” he admonished.

The Pope also denounced “blind and brutal” terrorism days after the deadly ISIS bombings in Brussels, Belgium.  Amid tight security, Pope Francis spoke to a crowd of 200,000 people, delivering a “message of life” for the world.