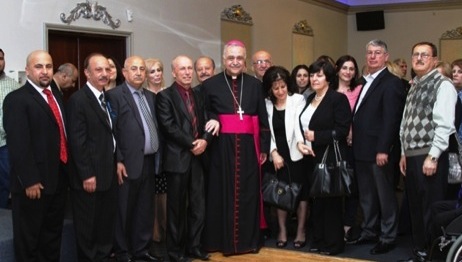 January 29, 2014 (El Cajon) – Pope Francis has assigned a Titular See of Foraziana to Bishop Bawai Soro for service of the Diocese of Saint Peter the Apostole of San Diego for Chaldeans and Assyrians.  This is a culmination of an eight-year process, since Bishop Sarhad Yawsip Jammo received Bishop Soro, his clergy, and thousands of their Assyrian Christian faithful into the Catholic Church. Bishop Jammo hosted a reception to honor the newly assigned Bishop at St. Peter’s Church in El Cajon on January 14.

“Our Diocese congratulates the whole church on the appointment of new pastors, and roles to help strengthen the congregation,” a statement issued by the Diocese reads. “Pope Francis has proven himself to be an integral part of the ever-growing Catholic Church. We are incredibly humbled by his recognition and appointment.”

The statement continued, “Bishop Soro will continue in his journey to strengthen his church and congregation. The celebration that will take place will spotlight the achievements of Bishop Soro as a lasting figure within the Chaldean and Assyrian community, and the Catholic Church. This is the culmination of an eight year process, and we hope for it to be yet another beginning in the Bishop’s efforts at achieving unity amongst all Catholics.”

Mark Paul Arabo, President and CEO of the Neighborhood Market Association which represents many Chaldean merchants, had his to say. “The Assyrian Church is an indelible part of the fiber that makes up this community. It is only right for a people crowned by history, to be recognized by a truly special pope.   He called the appointment “a day of celebration and unity for the 60,000 Chaldeans and San Diego’s Catholics. I am excited to join a celebration that will place the Chaldean and Assyrian Church atop a world stage. The Bishop’s appointment is a testament to the tireless work of both himself and congregation. ”

Bishop Soro was born in Kirkuk, Iraq, in 1954, ordained a priest in 1982 in the Assyrian Church of the East and consecrated a bishop in 1984.  He holds a master degree in systematic theology from the Catholic University of America in Washington, DC, (1992) and a doctoral degree in sacred theology from the Pontifical University of Saint Thomas Aquinas "Angelicum" in Rome (2002).  He converted to Catholicism (Chaldean Catholic Church) in 2008 and in 2009 he permanently moved to San Diego, CA. Bishop Soro has published many articles and lectured widely on the theology and history of the "Chaldean Church of the East."