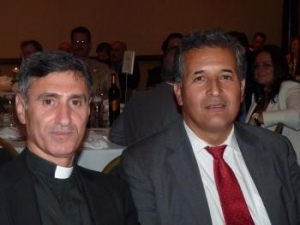 (January 8, 2015)- In a landmark decision, Pope Francis has ruled in favor of St. Peter's Chaldean Church in El Cajon in its battle to keep Father Noel Gorgis safely here.

Last October, Father Noel and other priests were ordered  by church Patriarch Louis Sako to return to Iraq,, where Islamic State (ISIS) terrorists have been systematically murdering and torturing priests. Father Noel and the other priests refused to go back to Iraq and were told they would be stripped of their priesthood, so the local Chaldean church appealed to Pope Francis at the Vatican.

St. Peter’s received word from the Vatican this week of the Pope’s unprecedented decision to invalidate the decree.

The case of Father Noel gained national attention after community leaders, including Mark Arabo, unified to keep Father Noel within the United States.

In a statement issued to the media, Arabo says, "We applaud the Pope's decision with solemn hearts. Our community can once again sleep soundly, knowing that our priest, and spiritual leader is safe within the United States.”

From the onset of the ordeal, Arabo has said that the community would support the Pope's decision regardless of the outcome.

Now, Arabo concludes that Pope Francis “has continued to stand as the light of reason and humanity for Christians and individuals of all denominations throughout the world. The Pope has made it clear that he will protect the sanctity of life for all Christians throughout the Middle East. This final judgment was indicative of just that. "