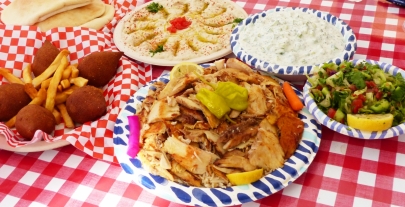 December 11, 2021 (El Cajon) — It can be easy to take a delicious meal at a restaurant for granted — but doing so would be difficult to do at Mal Al Sham, which celebrates its three year anniversary in El Cajon this month.

Whether swinging by for a quick solo wrap or sitting down with loved ones around a full platter, a dining experience with Mal Al Sham — also known as The Taste of Damascus — leaves diners with a genuine appreciation for the food, as well as for the people, places and experiences that led to its creation. 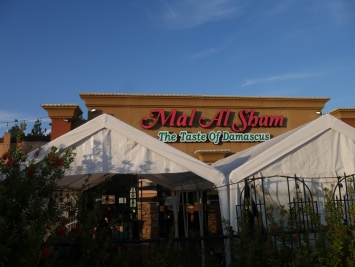 Nestled into the northwestern corner of East Main Street and Ballantyne Street, the Syrian owned and operated restaurant’s menu is brimming with authentic flavor. Their recent remodeling has yielded a charming indoor seating area and a spacious patio. On top of that, the amount of food per plate and the reasonable prices would be hard to beat anywhere west of Balboa Park.

"Our food is fabulous,” said Sam Hummi, the manager at Mal Al Sham who moved to El Cajon from Syria over ten years ago. He speaks four languages, studied in Germany when he was younger, and generally keeps Mal Al Sham running smoothly — from training employees on the cash register to jumping into the kitchen when more hands are needed.

Hummi eats at work every d 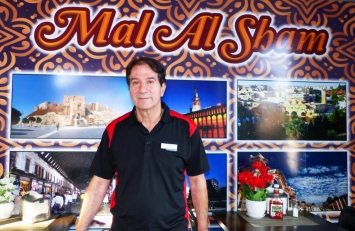 "Our spices are different than other countries,” explained Hummi about Syrian cuisine. “Cardamom, cinnamon, cloves,” he listed. “Dried lemon, some pepper.” He then dashed into the kitchen and grabbed a spice he could not recall the English name of, and returned holding it up — a bay leaf.

But Hummi had to stop unveiling the menu there. “Chicken Shawarma is a speci 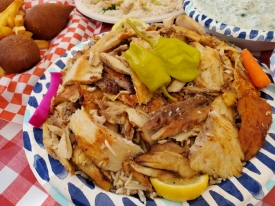 al spice, I cannot tell you what’s in it,” he said playfully. “It’s a secret ingredient. My boss, he doesn’t tell me.”

Safeguarded recipes aside, all it takes is one bite of a Mal Al Sham entree dipped in a homemade cucumber-mint yogurt spread to know that it is something special.

Hummi also noted how the owner of Mal Al Sham previously operated a grocery stall back home in Syria, but left to come to the United States for similar reasons as Hummi. 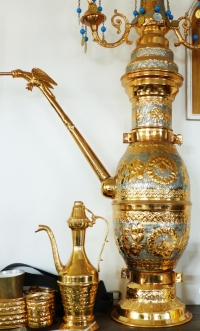 Because there it is war,” he said. “Everybody wants to go somewhere to have peace, enjoy the life. Be born to live not born to die, right?”

Hummi recalls how the first few years of getting settled in California were difficult in many ways, but that working at Mal Al Sham since it opened has been an enjoyable experience.

“People looking, always, for the good food and the good price.” he said. “People come in here, taste the food and come back.”

However, he noted that maintaining their mouth-watering offerings comes at a cost when the prices of their ingredients inflate.

“The meat, the bread, the yogurt,” he said. “Every day higher and higher. We want to survive." 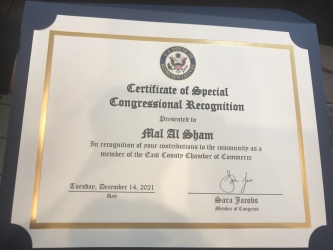 s a result, the management has had to slightly increase their prices — but they still make it a goal to keep it affordable so they remain a positive presence in El Cajon. Their shareable kibbeh plate, for example, is currently just $9.99

“Here, the community is not a rich community,” said Hummi. “We want to do for our community something good.”

Mal Al Sham offers breakfast, lunch and dinner via dine-in and takeout, and can be found at Chamber of Commerce food events and local festivals like the Taste of El Cajon. The restaurant recently received a Congressional recognition certificate from Rep. Sara Jacobs for contributions to the community.

The restaurant runs catering services as well, which has brought their food into parts of Orange County, including Los Angeles. They emphasize that they are not to be confused with the new restaurant across town called Gate of Damascus, which is a separate business.

It is clear that while Hummi and Mal Al Sham are a long way from Damascus, Syria, they remain linked by ingredients, recipes, techniques, and more than anything, by taste. To check out the menu and plan your visit to 388 East Main Street, visit https://malalsham.com/.