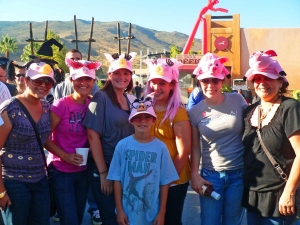 October 25th, 2009 (Alpine) -- “Smokin’ in the Park,” the state’s largest BBQ competition sponsored by Viejas, was held Oct. 17 at the Viejas Outlet Center. Last year’s event drew over 9,000 people and from the looks of the long lines of hungry barbecue aficionados waiting to sample the fare here, I’d say this year’s event was an equally savory success.

This free event included a music festival with Southern California’s most popular rock band, Los Lobos, and other entertainment. The event also featured vendors, a fun zone for kids, beer garden, Sam the Cooking Guy, and the main attraction—an array of tantalizing barbecue options to sample. 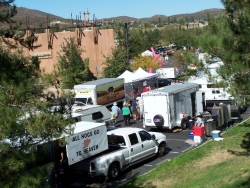 I must confess this was my first BBQ competition. I figured I was in hog-heaven and looked forward to munching mouth-watering mounds of meat. The first thing I discovered was that these competitions, while great fun for the public, are very serious business to participants. Sanctioned by the hallowed Kansas City Barbeque Society, the event offered $23,000 in cash prizes, an $8,000 first prize, and the prospect of a coveted place in the 21st Annual Jack Daniel's World Championship Invitational Barbecue in Lynchburg, Tennessee.

With a fist full of tickets at $2 a taste, I set out to gorge myself with fabulous food. Out of the fifty-two contestants most were from far-flung places far from East County. In fact the first place winner was “Piggy D’s BBQ” from far off Winthrop Washington. Many had long lines – and the most popular ran out of food by day’s end. Hint: If you come next year, arrive early and try past winners’ samplings first!

To my surprise many of the contestants had no retail outlet, restaurant or catering business. In other words only a select few people would ever get to taste their delicious creations.
So I decided to be the judge of my own best BBQ. My rules were very much simplified from the five page judging procedures of the KCBS.

First – my “contestants” had to be from East County. Second – they had to have a restaurant or catering business where fans could sample their wares AFTER the competition.  Third - I confined my judging to pork ribs. 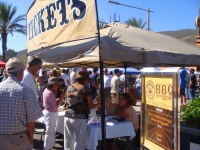 I got a list of East County teams from KCBS Representative Kelly McIntosh and set out to taste them all. (My apologies to any I missed.) My favorites included “Here’s the Rub,” which had the juiciest BBQ rib-meat I have ever tasted. The flavor of the meat was amazing – little else was added or needed.  Edward, the proprietor, was doing his best to serve everyone in the long line. (Forgive my informality in missing last names – my fingers were too coated with BBQ sauce to take notes on the spot!)

I liked the “Cattlemen’s Pit” from Jamul. The team’s “Texas style” BBQ really hit the spot. Their portable smoker looked like a locomotive. Gabriel, dishing up the ribs, said it was made from a converted propane tank.

Lead Chef Dennis, one of the “Porkateers” from El Cajon, served up succulent, fat ribs that had me licking my fingers.

Having lived in Hawaii, my tastebuds appreciate exotic flavors—BBQ with hints of pineapple or teriyaki. Our editor, Miriam Raftery, has traveled to such BBQ capitals as Memphis and Fort Worth, where slow-cooked Southern-style BBQ is the popular style. Working a booth for East County Magazine at the event, we both had opportunities to try a variety of BBQ flavors at the Viejas competition. 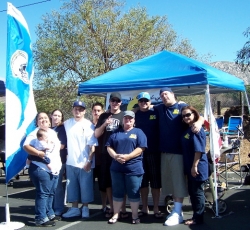 Among the local offerings, we both picked the same “utmost favorite” independently and without conferring. Our unanimous verdict: Cali (California)Comfort, the team from Spring Valley, had the most perfect ribs. The meat was so tender, you could suck it off the bone--flavorful with just the right balance of spices, and the sauce was to-die-for.

Team Captain Shawn Walchef was hospitable and appealing. The young crew was having a great time and the fun was contagious. I wasn’t at all surprised to learn that they serve up their BBQ at “Cali-Comfort Restaurant and Sports Bar” on Troy Street in Spring Valley, because the food most certainly has crowd-pleasing appeal.  We couldn't resist visiting Cali's a few days later; you can check out our savory review here.