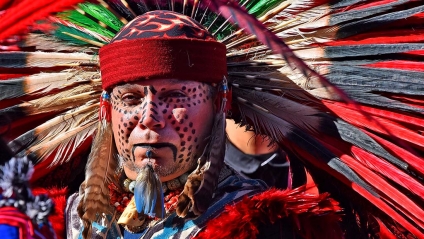 Photo:  Members of the Kumeyaay tribe danced at the beginning of the Women’s March rally in 2019. Photo by Chris Stone

November 27, 2020 (San Diego) - The surprise discovery of possible human remains at Kumeyaay cultural sites has sparked a new attempt to halt border wall construction — even with 14 of 15 miles of the bollards already done.

Meanwhile, a lawyer for the La Posta Band of Diegueno Mission Indians says she is working to get the Biden presidential transition team to end border-wall work come late January.

On Tuesday, the tribe filed a motion in San Diego federal court, asking Judge Anthony J. Battaglia to shut down remaining work even as the government pauses construction in the El Centro sector.

“A [preliminary injunction] is required because the Defendants are currently destroying sites of great religious, historic, and cultural significance to the La Posta and interfering with La Posta citizen’s enjoyment of their traditional territory,” said the latest motion.

A hearing is set for 2 p.m. Jan. 14 based on the court’s calendar, but lawyers for the tribe say they will likely ask for an earlier date.

But in recent weeks, things have changed.

The tribe notes that courts have found Wolf didn't have legal authority to order DHS actions such as suspension of DACA. The motion also contends the project violates the National Environmental Policy Act, the National Historic Preservation Act, the Native American Graves Protection and Repatriation Act and the Endangered Species Act.

According to the motion, the director of the Kumeyaay Historic Preservation Council recently found “numerous ceramic sherds indicative of cremation vessels” at a border site with a rock alignment that appears to be from the Kumeyaay culture.

The director, Thomas Holm, submitted a declaration that tells exactly where the “Kumeyaay sacred archaeological sites” are. But the document was immediately put under seal to avert visitors to the site in Davies Valley.

In a Nov. 18 email to La Posta’s lawyers, Andrew I. Warden of the Justice Department, defending Trump and others, said he had conferred with Customs and Border Patrol, which reported three features in close proximity to each other … in the El Centro A project area this week.

“CBP has initially identified two of the features as small fire pits or roasting features,” Warden wrote. “The third feature has been identified as a possible cremation site.”

So the Border Patrol has created a buffer zone of 100 meters around the features to “prevent any further construction activity and vehicle traffic in the area until further coordination with the tribes occurs,” he said.

Writing for the tribe’s legal team, Michelle LaPena said in Tuesday’s motion that a forensic anthropologist inspected the site and found two small bone fragments that could be human neck or face bones.

“The site also contains artifacts, flakes, core stones, scrapers, and hammer stones, and an ancient Kumeyaay trail passes by the site and is cut off by new border barrier construction,” LaPena said. “Tribal citizens regard this Kumeyaay cultural site as sacred. Had CBP conducted an adequate survey of the Project Area, it would have identified these sites.”

On Friday, LaPena added via email: “We believe the discovery of the cremations and the fire-affected rock shows the lack of care shown by the CBP and Army Corps of Engineers as they rushed to complete the construction. They refused to work with the Kumeyaay people to identify tribal cultural sites and cremations prior to construction.”

She said the tribe asked for the use of cadaver dogs to identify cremations and burials, “but they refused, saying it was ‘cost prohibited.’ They also argued that it was ‘too hot’ to use them during the summer.”

“However, we know that they refused to use cadaver dogs because they did not want to actually find burials,” she said. “They were under orders to move fast, and they believed that all laws were waived. We always knew they were damaging tribal cremations and cultural sites. But now we have the evidence to show that they knew … but they moved forward anyway.”

The bollards part of the wall project is expected to be done Dec. 21, LaPena said in the motion. Then the government plans to begin construction of the “linear ground detection system” adjacent to the 20 miles of new barrier construction.

“Defendants intend to excavate a 4 ft deep by 3 ft wide trench along the entire length of the project, including access roads, for installation of electrical equipment,” she said. “Defendants have also yet to install security features, such as lighting and cameras in much of the Project Area.”

The lighting resembles stadium lighting, she said, and installation requires excavation of a deep pit to anchor the light posts.

Besides disturbance of potential burial grounds, the tribe wants the lighting project halted because members say it will interfere with stargazing.

“Since time immemorial, Kumeyaay people have studied the night sky,” the motion says. “Astronomy is an integral piece of Kumeyaay religion and cultural practice. … Installation of lighting on the border wall will cause light pollution that will injure the Tribe’s ability to stargaze.”

On Friday, LaPena told Times of San Diego that the new Biden administration can’t withdraw from the case because the government is the defendant.

LaPena said current waivers allowing the wall work were not legally enacted — because acting Secretary Wolf was not properly appointed — and the use of transferred funds from military accounts was illegal as well.

“It is our position that the government parties are exceeding the scope of their authority granted by Congress by continuing with the construction,” she said.

Has the tribal legal team been in touch with the Biden transition team to expedite a halt to border wall construction?

“We are still working on that front, but do not have any news that can be made public,” she said. “As you know, there is resistance to the transition and they have much bigger priorities right now.”