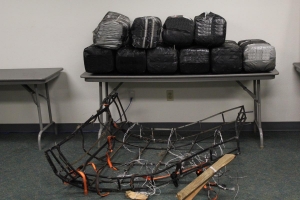 November 28, 2013 (San Diego)-- Agents with U.S. Customs and Border Protection’s (CBP) Office of Air and Marine (OAM) and the Border Patrol interrupted a drug smuggling attempt involving air drops of marijuana bales from  an ultra-light aircraft Monday.  Authorities seized over 260 pounds of marijuana with a street value of $157,000. Two suspects were arrested, said Mary Beth Caston with the Border Patrol.

The incident occurred around 4:15 a.m., when OAM’s Air and Marine Operations Center (AMOC) spotted and tracked an ultra-light aircraft crossing over the Mexico/United States international border and alerted the San Diego Air and Marine Branch and San Diego Sector Border Patrol.  OAM dispatched an AS-350 helicopter, which guided Border Patrol agents on the ground to the remote drop location north of Brown Field Airport.

At the drop location agents found ten bundles of marijuana and a metal cage – the item that is used to hold cargo under an ultra-light aircraft.  Agents also apprehended two men near the drop zone and seized a 1999 Ford Expedition.  The bundles of marijuana weighed more than 262 pounds with an estimated street value of $157,000.

William Raymond, OAM’s Director of Air Operations said, “CBP continues to be vigilant in identifying and interdicting these types of attempts.  This is also an example of how coordinated efforts utilizing technology are playing a key role in preventing illegal activity along our border.”

During processing, the men were determined to be a 32-year-old illegal alien and a 49-year-old legal permanent resident.

The men and marijuana were turned over to Homeland Security Investigations.  The ultra-light aircraft did not land and was tracked returning to Mexico by AMOC.

Customs and Border Protection welcomes assistance from the community.  Citizens can report suspicious air and marine activity to the Air and Marine Operations Center and remain anonymous by calling (866) AIR-BUST (866-247-2878).