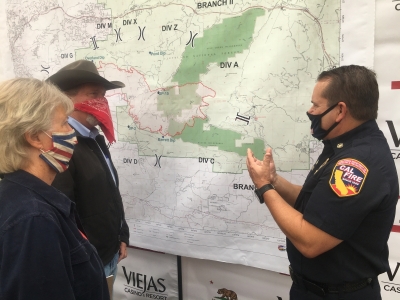 Update 8:37 p.m.: The fire is now 11% contained and has burned 17,565 acres.  20 habitable structures have been destroyed and 9 more homes damaged; 25 outbuildings have also been lost.

September 8, 2020 (San Diego’s East County) – At a press conference today held at the Viejas events center in Alpine, fire chiefs and county officials warned the public that Santa Ana winds with gusts up to 50 miles an hour are forecast to hit starting at 8 p.m. tonight – with the strongest winds in the middle of the night. Though firefighters have been working tirelessly battling blames and bulldozing containment lines, prioritizing the fire’s western flank, leaders warn that the winds will fan the fire westward towards Jamul and San Diego.

“The potential is out there for a very dangerous situation,” said Supervisor Dianne Jacob (photo, left), who added that she hopes and prays we don’t see another major firestorm like the destructive Laguna fire in 1970, Cedar Fire in 2003 or the 2007 firestorms.

Register with AlertSanDiego and ReadySanDiego.org to get evacuation notices and reverse 911 calls. You can also sign up at www.EastCountyMagazine.org for our free wildfire and emergency alerts via email and follow EastCountyAlert on Twitter to receive  regional emergency notifications. 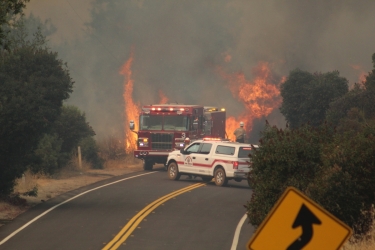 Cal Fire and County fire Chief Tony Mecham warned, “We have a sleeping giant in the backcountry.” He and other officials urged residents in the evacuation warning area not to wait to evacuate.

ECM editor Miriam Raftery asked Chief Mecham how residents will be notified in areas that are left without power due to rolling blackouts, planned maintenance by SDG&E or outages caused by the fire, since lack of electricity can knock out phone service and some rural areas lack reliable cell service.

He said Sheriff’s deputies will be going door to door, knocking to alert residents. But he said, “If you have large animals or vulnerable people, we are asking those people to leave now.”

The fire which began three days ago in the Japatul area east of Alpine has burned over 17,000 acres and is 3% contained, though firefighters prevented any additional losses of structures overnight. So far, 11 homes and over two dozen outbuildings have been lost. 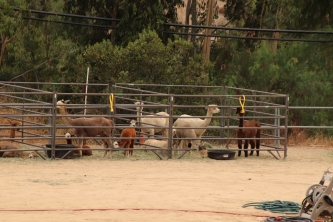 Sheriff Gore cautioned that trailers and big rigs called in late to evacuate livestock “ends up clogging back roads and blocking emergency vehicles.” Call (619) 236-2341 if you need help to evacuate large animals.  If you must leave animals behind, leave at least two days of water for each animal, the Sheriff advises.

The Lakeside Rodeo Grounds and Poway Rodeo site may be activated to take in large animals if the need becomes great, said Poway Mayor Steve Vaus, who is running for Supervisor. 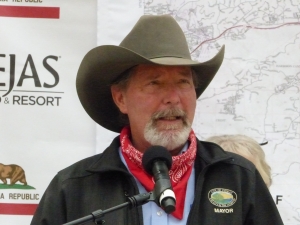 “There are heroes and angels out there,” said Vaus (photo, left), who spoke of seeing photos taken by his wife, who along with other animal rescue volunteers have driven toward flames to save others.

Evacuated residents can go to temporary evacuation sites at Steele Canyon High School, 12440 Campo Rd. in Spring Valley, or  El Capitan High School at 10410 Ashwood Street in Lakeside. (Note: Joan MacQueen Middle School has been closed down as a shelter due to capacity issues.)

. If you need emergency assistance with evacuation, call 9-1-1. For additional information, call the San Diego Sheriff Department non-emergency line at (858) 565-5200.

Sheriff Gore also urged the public not to fly drones to take photos of the fire area, sine this prevents fir 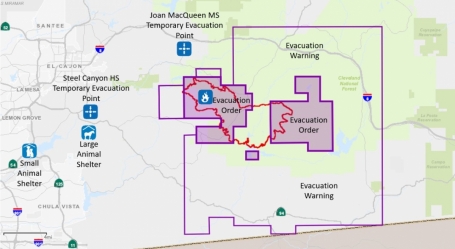 Fire officials noted that statewide, 25 major fires are being battled by some 14,000 firefighters including international aid. Over 2.5 million acres in our state have burned so far this year, a new all-time record.

Resources are spread thin and while firefighters are fighting valiantly with the resources available, the public is warned to be backed and ready to evacuate tonight. (Right: Valley Fire perimeter, evacuation orders and evacaution warning areas.

Chief Mecham said statewide, 8 people have died in wildfires and others have been flown to burn centers, though none in the Valley Fire.  He praised the ground crews working with hand tools. “What puts fires out still is young men and women on the ground…” he stated.

The Navy has agreed to provide helicopters to help battle the blazes.But they can’t fly at night, nor can the large airtanker that has been dropping fire retardant here the past two days.  If homes and lives are in immediate danger, San Diego Fire could send water-dropping helicopters capable of flying at night. 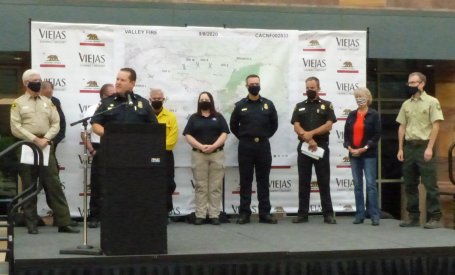 Supervisor Jacob said she has toured the fire area and “seen the scorched gray earth” as well as people parked alongside roads, unable to go home. She said her heart goes out to those who lost homes, but praised those who had cleared defensible space that saved some homes. She also praised firefighters and the county’s coordination among multiple agencies which she called “second to none.”

Though our region is “the best prepared we’ve ever been,” according to Jacob, only time will tell if resources will be enough to prevent the Valley Fire from jumping containment lines tonight and blazing a destructive path toward densely populated areas.

Cleveland National Forest has ordered closure of all national forests from San Diego north to Stanislaus near Yosemite to prevent hikers and campers from becoming trapped.

Chief Mecham (photo, right) urged those who wish to help fire survivors to choose a reputable nonprofit organization. “If you wish to donate to help the Valley Fire survivors, San Diego Foundation has set up a Valley Fire Recovery Fund at its website, he added. That site is SDFoundation.org/DisasterFund.

CalFire providing update on their efforts in preparation for Santa Ana winds expected to arrive this evening at 8:00 p.m.