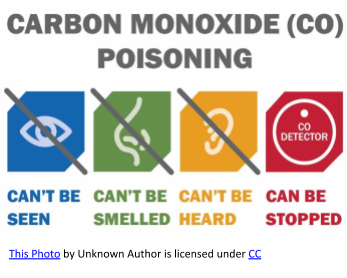 By Miriam Raftery
February 19, 2019 (Potrero) – Alejandra Alejandre, 38, of Potrero died of carbon monoxide poisoning in her home on Hartley Hill Road. Two other family members, including a child, were taken to a hospital on Wednesday, according to Cal Fire.

According to the County Medical Examiner, the woman was found unresponsive in her bed and a family member called 9-1-1.  Paramedics provided cardiopulmonary resuscitation and advanced cardiac life support, but were unable to revive her. She was declared dead at the scene.

The San Diego Union-Tribune reports that a man and child were taken to a trauma center with symptoms including lightheadedness and nausea indicative of carbon monoxide toxicity.  Firefighters tested the air and found elevated levels of the gas, which is colorless and odorless.
The source of the carbon monoxide poisoning is under investigation, however in winter months a malfunctioning heater is often responsible for such tragedies.  Residents are advised to ask SDG&E to provide a free inspection before lighting the pilot light on a gas heater in the fall or winter months.  A carbon monoxide detector, or several in a larger home, can also save lives by providing early warning. Be sure to change batteries annually on all smoke detectors.
Other potential sources may include a portable heater or devices meant only for outdoor use, such as a hibachi or camp stove, if used indoors without ventilation.
Carbon monoxide poisoning at high levels can induce brain damage or death.