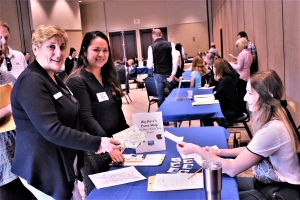 November 16, 2019 (San Diego) – How tough is it to survive when your household income is below the poverty line – especially when life’s unexpected obstacles arise?  Some local residents found out first-hand during a Poverty Simulation hosted by the  Jewish Community Foundation San Diego, in conjunction with other agencies, on Nov. 13 at Beth Israel of San Diego.

The Poverty Simulation events began in the 1970s by the Reform Organization of Welfare (ROWEL). It was put together as a way to demonstrate the difficulty of living on an extremely narrow, welfare-based budget, though the hardships faced are also similar to those facing people on low wages or fixed incomes, such as Social Security or disability. A prepared kit is used to set all the scenarios in motion for family units and circumstances.

MACA (Missouri CAN) bought the copyrights in 2002 and revised the kit used.  The latest revision was done in 2012. Poverty Simulation events are staged all around the country every year.

Another agency involved in this staging cited the circumstances dealt with by their clients.

“We help a lot of East County families who are on the verge of homelessness,” said chief executive officer Greg Anglea, of InterFaith Community Services. “Most often they had unexpected emergencies – losing a job or a medical emergency.”

Historically, the Poverty Simulation experiences have been held in North County.

“This is our fourth Poverty Simulation,” said manager for Alliance of Regional Solutions, MaryLynn McCorkle, “We partnered with Jewish Community Foundation - San Diego. There are 62 participants and over 20 volunteers here.”

Participants received a packet that assigned their family circumstances.

Both had health issues. Their income was set at $1,452 per month from Social Security.  Within that perimeter they had to pay off $100 for last month’s Medicaid/Medicare costs and other medical expenses of $50 monthly. With four increments of time, each representing a month, they had to pay rent, utilities, clothing, pre-paid burial fees, medicine, and food set at $80 per month.  They additionally got hit with a bad “Luck O the Draw” card of a visitor that added to their food costs.

Other pretend family units had underage kids that would get picked up for truancy by a roving pretend police office, and there was a participant named “Dude” who tried to engage minors/adults in illegal activities.

Tables were set up; most required a transportation game piece to get to, such as a church with daycare or aid, a pawn shop, an employment office that didn’t always have jobs, a bank, a school that handed out tardy slips, and more.  Each table typically had rules, setbacks, and requirements to address. 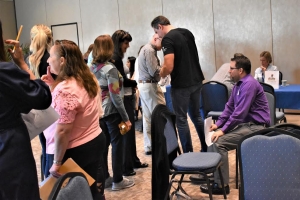 The attendees’ goals were to keep their shelter secure, keep tots in daycare and school-age children in school, but were able to use resources such as agencies/businesses for assistance--if they applied or asked for help.

Pawning items at a pawn shop, giving plasma for money, and illegal activities were just a part of what families did to raise money to survive.

Startling emotional reactions surfaced from the attendees, in character and out of their pretend roles.

“You do what you have to do,” said participant Ben Arnold of his pretend son (Josh Lipsky) turning to theft to help the family out.

‘He’s making it ‘stealing’ but we have a roof over our head,” said Josh Lipsky’s imaginary mom, Mara Hochberry-Miller of her pretend son’s illegal actions.

“I felt trapped,” said Genevieve Deperio Fong. She noted that the agencies she went to for help had become desensitized to others’ circumstances adding “We were just a transaction.”

“How do you keep them entertained and patient at all the appointments?” questioned USD-Kroc School’s professor of practice and institutional relations, Karen Henken, on how difficult it would be for parents of minors to go to all the agencies, social service offices, and other places with young children. Although she knew the answers, Henken’s empathy for the parents’ plight was obvious.

At the end of the three-hour game questions were asked of the players such as if they got evicted, resorted to crime, sold their SNAP voucher, had kids expelled from school, experienced food insecurity, and more.  All of this showed how difficult it is just to survive in poverty.

Leaders challenged the attendees to find ways to act on what they had learned and take their deepened empathy into their communities.

One woman said, “We have to do better to break up the cycle” of poverty.

A real-life list of resources was handed out to attendees to inform them of places to find help that included: South Bay Community Services in Chula Vista, Home Start, Crisis House, and Jewish Family Services.  The simulation, which cost $10 per person, was also a fundraiser for those in need.